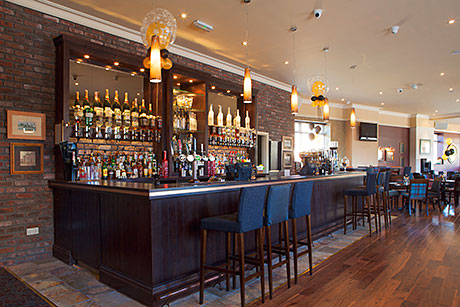 “The designer laughed and said it was the first time he’s done a bar based around a kitchen,” said Mark Heirs, recalling his refurbishment plans for the Callendar Arms in Falkirk.
But for Heirs, a former employee at Blumenthal’s three Michelin star Fat Duck restaurant in Berkshire and a quarter-finalist on BBC’s Masterchef, food was always going to be the bedrock of the revamped business.
Earlier this year, the 27 year old chef took the helm at the ‘Cally Arms’ from his parents, Alan and Val Heirs, who have leased the Punch Taverns pub since 1994, and embarked on a ten-week refurbishment project to reposition the traditional pub as a modern food-led venue.
A design team from Davidson Baxter Partnership of Kirkcaldy, comprising architect Alan Baxter and interior designer Gillian Morris, worked with Heirs on the new look, which was planned around food service, while Dimension Shopfitting was brought in to do the fit-out.

We’ve had very positive feedback and a lot of new customers.

The chef worked with Larbert-based Catering Supplies & Repairs (CSR) on a design for the new kitchen, which was extended and overhauled.
Front-of-house, an open-plan space was created in what was previously three separate trading areas.
The bar combines a traditional dark wood frontage and gantry with exposed brickwork and contemporary bar stools. Elsewhere, neutral decor has been paired with bold, bright fabrics on the fixed and loose seating.
Heirs said the interior of the pub, which dates from the 19th century, has been totally transformed.
“We went back to four walls to start again,” he said.
“I wanted to bring the pub into the 21st century while looking toward a food service.
“We turned it into one big dining space for flow; an area where people can eat and dine.
“It’s now broken up with booths to create a bit of privacy.”
It wasn’t just the interior of the pub that was revamped.
Punch Taverns spruced up the exterior of the premises with fresh paintwork and new signage.
“They did the outside and we did the inside,” said Heirs.
“Punch were involved at every step but we were in charge of the look.”
When it came to the new food offer, Heirs turned to suppliers he has worked with throughout his career.
The chef collaborated with Jonathan Honeyman of The Aberfoyle Butcher on the new menu for the Callendar Arms.
“We work closely for menu development,” said Heirs. “We do signature recipes together, working them out in the kitchen and then he produces them exclusively for me.”
To complement the new food offer at the Callendar Arms, the drinks range was also refreshed; the gantry stocks more than 200 spirits and there’s a comprehensive selection of draught and bottled beers.
The new-look Callendar Arms opened its doors on April 29 and Heirs said the changes have gone down well with customers.
“We’re getting lots of positive feedback,” he added. “There’s a large amount of new customers.” 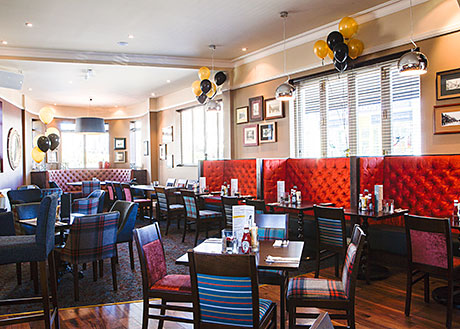 Images – The neutral decor has been paired with bold, bright fabrics on the fixed and loose seating.