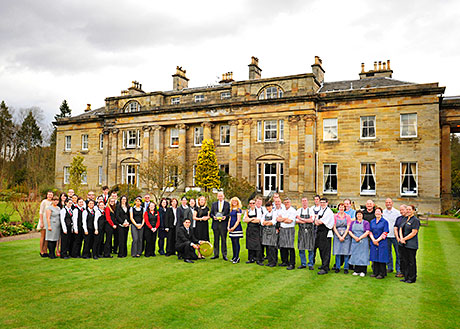 The hotel, which was relaunched in 2010 after a £20 million refurbishment, was named Hotel of the Year at last month’s awards ceremony in Glasgow’s Crowne Plaza hotel.
Chairman of the judges, Gary MacLean Quin, praised the Grand Central for “its all-round performance, passionate leadership, staff management and wise future development”.
“It was great to see the old building reopen a few years ago and its plans are marvellous for Glasgow,” he added.
Grand Central also took the award for Events Hotel of the Year.
Other winners included Edinburgh’s Hadrian at The Balmoral, which took the Restaurant of the Year prize; Crieff Hydro, which won the title of Family Hotel of the Year; Inver Lodge at Lochinver in Sutherland, which was named the top rural hotel; and Balbirnie House, which took the Wedding Hotel of the Year award.
It is the seventh time in the past nine years that Balbirnie House has won the title.
Managing director Nicholas Russell paid tribute to the hotel’s “tremendous team”, “stunning location” and “magnificent grounds”.
“Balbirnie now has a jaw-dropping accumulated history of special events that have taken place here,” he said.
“We are particularly focused on offering truly wonderful and accessible packaged pricing, with really great value, albeit with a great proportion of our brides coming from London we still see some occasions which do not have a particularly restricted budget.
“Additionally, in the last 12 months, we have done more than we have ever done to remain ahead of the curve.”
Aurora Hotel Collection, whose portfolio includes Cairn Lodge, Glenbervie House and the Kenmore Hotel, was named Scottish Hotel Group of the Year, while its flagship hotel, Airth Castle Hotel & Spa, took awards for Business Hotel of the Year and Events Hotel of the Year for the Central and Fife region.
Aurora Hotels founder and chief executive Steven McLeod said: “We are still a relatively young company and it is a massive achievement for our group to be recognised in this way by our industry peers.
“To take home this many awards is fantastic and is a reflection of the support, dedication and absolute commitment of my team. I really am so delighted for everyone and I am chuffed to bits and very proud.”

Image – The team at Balbirnie House in Fife celebrates after winning the Wedding Hotel award at the Scottish Hotel Awards.