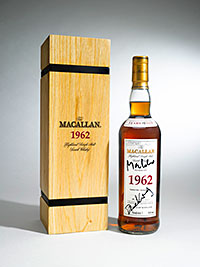 SINGLE malt The Macallan joined forces with Britain’s most famous spy for a charity auction.

A signed bottle of The Macallan 1962, distilled the same year the first James Bond film was released, was auctioned at Sotheby’s to raise funds for charities supporting members of the British security and intelligence services.
The bottle, which was signed by cast members from the most recent Bond outing, Skyfall, raised £9635 for the charities, which had been selected by Prince Charles.
The whisky featured in several scenes in the film.
David Cox, of brand owner Edrington, said: “Following on from The Macallan’s ‘cameo’ in Skyfall we were honoured to be able to take part in this prestigious, Finest & Rarest Wines sale and are ecstatic with the amount raised.
“The charities that will receive the monies raised are very fitting and will help support members of the British security and intelligence services.”