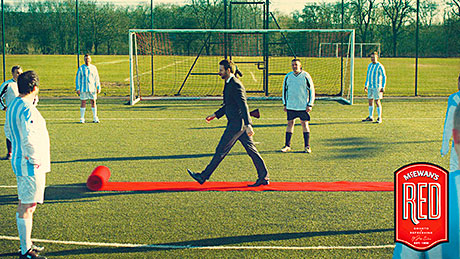 THE new ale from McEwan’s will make its TV debut during next weekend’s football finals.

McEwan’s Red, which was launched by Wells & Young’s late last month, will feature in a new advert to be screened on STV and Sky Sports around the UEFA Champions League final on Saturday May 25 and the Scottish Cup final the following day. Called ‘Red Carpet’, the advert shows people being taken on a journey along a red carpet towards a pint of McEwan’s Red; there are two versions of the ad depicting ‘in outlet’ and ‘at home’ drinking occasions.
“The advert, like the new brand, is positive, upbeat, modern and high energy, reflecting the new outlook for McEwan’s,” said brand manager Peter Mooney.

Image – On a roll: the new McEwan’s Red advert will air next weekend.