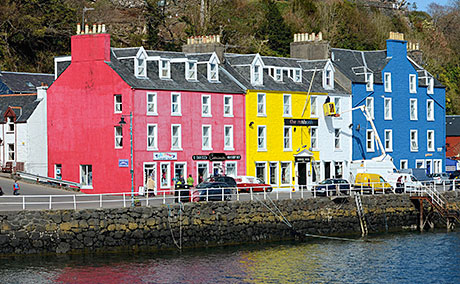 IT’S perhaps one of Scotland’s most recognisable harbours – not least because it formed the backdrop to children’s TV series Balamory.

Now the colourful Main Street of Tobermory, on the Isle of Mull, has been restored after the owners of the Mishnish reinstated the hotel’s yellow facade – seven years after they caused controversy by painting it black.
Robert MacLeod, part of the fifth generation of the family to run the hotel, said the black colour scheme reflected the heritage of the Mishnish and also weathered the sea front well.
“We did feel, however, that it was time to go back to the yellow to cheer us all up in these austere times,” he said.

Image – Showing some front: the exterior of the Mishnish is yellow once more.