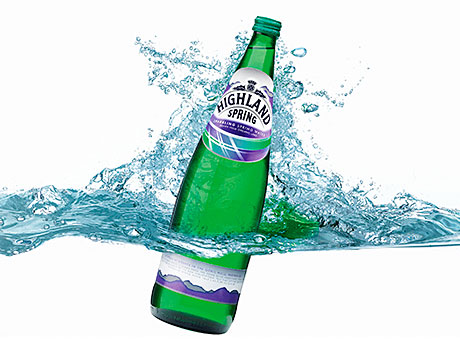 The Perthshire firm said the 2013 UK Bottled Water Report by Zenith International shows its brand is the biggest-selling in the UK by volume.
The volume of Highland Spring sold in 2012 was said to be up 9% to nearly 200 million litres – a figure it said gave it the top spot in the packaged water market by volume; Highland Spring had 10.6% brand share last year, up from 10.2% in 2011.

This is a British success story that we are incredibly proud of.

Les Montgomery, chief executive of Highland Spring, said reaching the ‘top spot’ is a “major milestone” for the company, “signalling the end of 30 years’ domination by imported multinational brands”.
“This is a British success story that we’re incredibly proud of,” he said.
“We have fulfilled one of our long-term ambitions of becoming the UK’s biggest-selling bottled water brand and we are now looking forward to the next chapter as we build on our number one position.

We have fulfilled one of our long-term ambitions.

“European brands have long dominated the UK bottled water category having played a pivotal role in its development in the 1970s but I believe we are seeing a sustained wave of support for British brands, not least because of the residual goodwill that London 2012 and the Diamond Jubilee created last year.
“Consumers derive confidence from homegrown brands with strong provenance and traceability and are increasingly choosing these over imported products.”