Industry ‘sells’ itself to tourism buyers from 40 countries at Expo 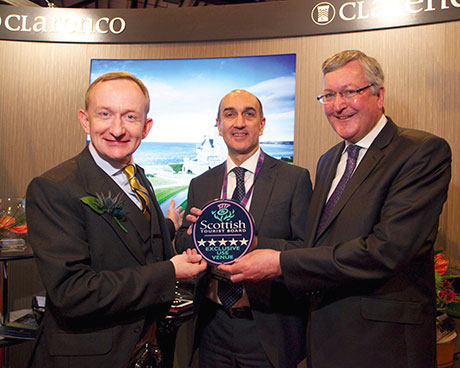 SCOTTISH hospitality and tourism businesses were in the global spotlight last month as hundreds of international ‘buyers’ attended the VisitScotland Expo trade show.

More than 700 representatives from the international travel trade, including tour operators and travel agents, attended the event at Glasgow’s SECC.
In total, travel buyers from more than 40 different countries were present, as well as more than 250 exhibitors from across Scotland’s tourism and hospitality industries.
VisitScotland chairman Mike Cantlay said Expo was the “perfect tool” for showcasing Scotland to the global travel industry.
“It’s a big year for us, it’s a competitive world out there, and we need to go position ourselves,” said Cantlay.
And he urged Scottish hospitality operators to do all they can to capitalise on the opportunities provided by next year’s suite of sporting and cultural events, which includes the Commonwealth Games, Ryder Cup and Homecoming 2014.
“I think the most important thing is to give ourselves a shake and make sure we aren’t complacent,” he said.
“What keeps me up at night is waking up in 2015 and thinking ‘oh, we missed it’.
“We need to remember that the world doesn’t owe us a tourist industry. It’s our number one industry, and we need to continue to fight our corner.”
As well as the event at the SECC, VisitScotland invited the overseas visitors on ‘familiarisation trips’, which saw them tour various destinations around Scotland.
“We need to seize the opportunity to think about the world of tourism,” said Cantlay. “It is a competitive world and they [tourists] ain’t just going to turn up. We have to continue to position ourselves to be competitive and look for the opportunities to exploit as we go along.”
Among the exhibitors at this year’s event were Diageo, Clarenco Hotels, G1 Group, the Orkney Brewery and the Scotch Whisky Experience.
Susan Morrison, director and general manager of the Scotch Whisky Experience, said the event offered “an opportunity to meet our existing contracted suppliers and build on those relationships and to meet new contacts”.
She added that the Experience’s stand at Expo had been particularly popular with visitors from Russia and China.
“We want to show them how versatile whisky is,” said Morrison. “They can learn about history and culture, seeing whisky as an icon of Scotland rather than just a drink.”