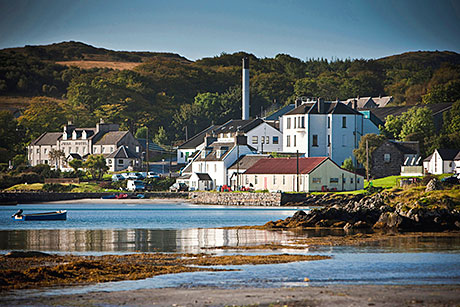 JURA distillery will celebrate its 50th anniversary later this month with a two-day whisky festival.

Part of the Fèis Ìle (Islay Whisky Festival), the Jura Whisky Festival on May 29 and 30 will feature a programme of live music and interactive whisky tastings.
Visitors to Jura will be able to discover the story behind the distillery, which was rebuilt by local estate owners Robin Fletcher and Tony Riley-Smith in 1963, and sample some of the malts produced at Jura, including Delme Evans Select and the Festival Bottling.
In a first for the Jura festival, a whisky masterclass will be held at sea, giving visitors the chance to try Jura’s newest spirit, Turas Mara, during a 40-minute cruise of the bay.
The distillery will also invite a “lucky few” to sample the Delme Evans Select, which takes its name from distillery architect William Delme Evans and was released in 1988 with just over 500 bottles selling out.
Meanwhile, master blender Richard Paterson will lead a tasting masterclass of this year’s festival bottling, which is described as “a marriage showcasing the best of Jura’s heavily peated and sherry styles”.
Paterson will also host an exclusive pre-launch of the Jura 40 year old, which, at the time, will be 39 and three-quarter years old.
Distillery manager Willie Cochrane said: “Jura has taken part in the Fèis Ìle for years; however 2013 is not just any ordinary year.
“Excuse the pun, but we are pushing the boat out to celebrate the 50th anniversary of the rebirth of our great distillery, and we’re hosting more tastings, tours and activities than ever before.”

Image – The festival will celebrate the “rebirth” of Jura distillery 50 years ago.