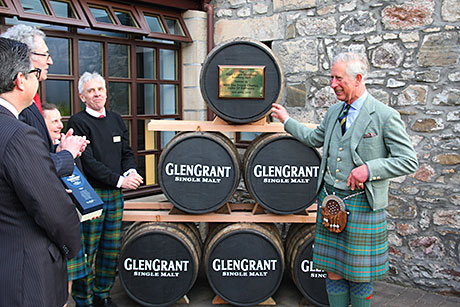 The Duke of Rothesay officially launched the new facility, which Glen Grant claims is the largest in the whisky-producing region, before meeting distillery staff and watching the bottling process.
He was also given a tour of the distillery and visitor centre in Rothes, and was presented with a bottle of the limited edition Glen Grant Five Decades single malt whisky, the latest expression from the distillery, at the end of his visit.
Bob Kunze-Concewitz, chief executive of Gruppo Campari, which has owned Glen Grant since 2006, said the new bottling hall means Glen Grant’s entire production process, from barley to bottle, now takes place at the distillery.
“The new bottling hall is another example of our commitment to Glen Grant and the Speyside region,” he said.
The Duke of Rothesay also opened the Helius CoRDe biomass combined heat and power plant in Rothes. A joint venture between Diageo, Edrington, Chivas, Inver House, John Dewar’s, Campari and Ben Riach, the plant uses by-products from nearby distilleries to generate electricity.
Gavin Hewitt, chief executive of the Scotch Whisky Association, said the plant is an example of the achievements of the whisky industry’s environmental strategy, which was launched in 2009.
“It was a pleasure to welcome the Duke of Rothesay to Speyside and to show him the level of commitment and investment in the Scotch whisky industry,” he said.