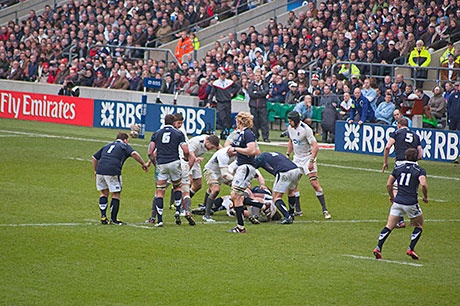 CALLS by top-flight football clubs to lift the ban on the sale of alcohol at Scottish football matches have been slammed by trade group the SLTA.

Celtic chief execitive Peter Lawwell wants the controls, which were introduced in 1980 after fans clashed at the Scottish cup final between Celtic and Rangers at Hampden, to be relaxed so fans can buy alcohol during games.
Currently, alcohol can only be sold in hospitality and corporate areas during football matches in Scotland; in England, spectators can buy a drink on the concourses at designated times but are not allowed to take it back to their seats.
The Scottish Government lifted the ban for international rugby matches at Murrayfield stadium in 2007.
Lawwell, along with Hibernian and Aberdeen football clubs, wants the ban lifted for football games.
But SLTA chief executive Paul Waterson dismissed the calls, saying such a move would go against proposals to give police powers to close premises around football matches, which were outlined in the Scottish Government’s Further Options for Alcohol Licensing document.
“We don’t agree with that at all at a time when the Scottish Government is trying to close pubs down round about football stadia after some old firm games that were a bit feisty,” Waterson told SLTN.
“I think the timing is all wrong.
“If you have problems in the stadiums are their licences up for review? I don’t think they understand that if there’s trouble in football stadiums there can be a review of the licence.”
A spokesman for Aberdeen Football Club said it would “welcome any revisiting of the current licensing laws” for football stadiums.
“Other sports and, indeed, football in other countries have demonstrated there is an appetite for responsible drinking as part of the overall match-day experience and while the present legislation was entirely fit and proper when it was introduced, perhaps the time is right for a rethink,” he said.
A Scottish Government spokesman said: “We are committed to ensuring that football fans can enjoy our national sport in a safe, enjoyable environment.
“Decisions are informed by advice from the police, and we are actively working with football authorities, the police and fans’ representatives to explore how we can both improve safety and the enjoyment of sporting experience for fans.”

Image – The Scottish Government lifted the ban on selling alcohol at international rugby matches in 2007.