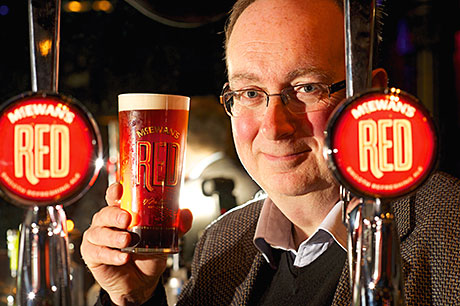 THE launch of McEwan’s Red marks the first step in a journey by owner Wells & Young’s to “rejuvenate” the brand.

Speaking at the unveiling of McEwan’s Red in Edinburgh, brand manager Peter Mooney said the new 3.6% ABV ale aims to broaden the appeal of the McEwan’s brand to younger consumers.
McEwan’s Red, which is brewed at the Caledonian Brewery in Edinburgh (the canned version is produced at Wells & Young’s facility in Bedford), is primarily pitched at 30 to 50 year old males – a younger audience than sister beers 60/-, 70/-, 80/- and Export.
Wells & Young’s, which acquired the McEwan’s and Younger’s brands from Heineken in 2011, described Red as a “smooth and refreshing” pint that delivers a “depth of flavour that is still sessionable”.
Mooney said the new ale is the result of consumer and trade research into six or seven different concepts.
Its launch is the first stage in a two-pronged strategy to refresh the existing McEwan’s range while introducing new ales.
“We’re looking at Export and the Shilling range to keep them relevant and refreshed for their loyal consumers but we’re also broadening the range,” said Mooney.
“This is not replacing anything in the McEwan’s range – it’s as well as; we’re exploring a number of options for our next phase of product development.”
The launch of McEwan’s Red is being backed by branded glassware and point of sale material in the on-trade. Wells & Young’s has also produced a guide to the ‘two-part pour’ for bar staff. The ale will be launched in 440ml cans in the off-trade later this month, when the ad campaign will also launch.
Paul Wells, chairman of Charles Wells, the parent company of Wells & Young’s, said the launch of Red signals the beginning of a “new chapter” for the brand.
“McEwan’s is embedded into the culture of Scotland and we intend to satisfy the consumers who already love the brand with new variants while also introducing it to a new generation of ale drinkers,” he said.
“Red is the right brand at the right time to kick-start this process.”

Image – Putting it all on Red: Paul Wells said the launch of the new ale marks the start of a new chapter for McEwan’s.