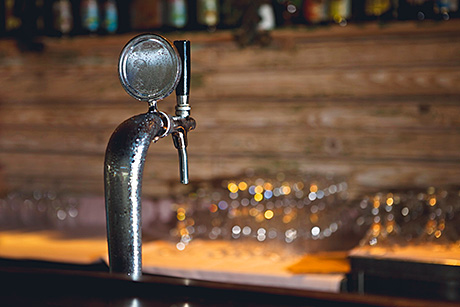 THE burgeoning world beer sector seems to have captured the imagination of operators across Scotland.

With the category said to be enjoying strong growth north of the border (see page 24), bar and restaurant owners have sought new ways to maximise sales of beers from around the globe in their outlets.
At Aberdeen restaurant Musa, world beers are approached from a culinary angle.
The Exchange Street eatery’s lunch and dinner menus feature ‘beer suggestions’, encouraging customers to try a range of beers from both local craft producers and brewers around the world. Menu suggestions include homemade sun-dried tomatoes with German Weissbier Erdinger, beetroot hummus paired with Brewdog’s Punk IPA and a pan-fried rib eye steak accompanied by San Francisco’s Anchor Steam beer.

Some people try different beers on holiday and want to drink them when they come back.

The restaurant, which is owned by Brewdog co-founder James Watt, also hosts bespoke beer dinners.
Popular beer nations with Musa customers include the USA, Australia and Belgium with one particular Hawaiian beer, the Maui Coconut Porter, selling out “all the time”, according to general manager John Kelman. Erdinger is also said to be popular in the Aberdeen venue, along with Belgian pale ale Duvel at 8.5% ABV and the 32% ABV Tactical Nuclear Penguin from Brewdog.
“We do promote local beers but we also keep it funky with the world beers,” said Kelman.
At St Andrews hotel Greyfriars, a different approach is taken to promoting world beers.
There are no food pairings on its ‘beers of the world’ menu, with general manager Jim McClements believing drink selection is “a matter of personal taste”.
Instead, customers can choose from 62 beers and ciders from 24 countries around the world, including Kenya, China, Estonia and New Zealand.
Following his appointment as GM in 2006, McClements said he decided world beers were a “major must-have” and compiled an initial menu of his personal favourites from Belgium and Germany and a few others sampled while abroad.
“Always on the look out” for new beers, he said he has been fortunate to have had international staff who have made their own recommendations.
Coopers products from Australia and Tasmanian beer ‘James Boag’s’ are “tremendously popular” having been stocked by Greyfriars on the suggestion of an Australian staff member.
The hotel sources its beers from Dameck and McClements said he is constantly adding to the selection. He also attempts to source branded glassware for the range, which, he said, brings in some “truly spectacular glasses”.
The next print run of Greyfriars’ beers of the world menu will see seven new brews added to the mix, including three new African beers, additional products from Australia and the USA along with two spirit-flavoured beers: Cuvana and Dead Crow, launched by SHS Drinks in January.
McClements said world beers provide “quite a unique topic for conversation with customers and appeal to many age groups, both male and female”. The Greyfriars’ world beer selection is said to be particularly popular with university students and golfers aged between 20 and 45.
“We get a lot of visitors from golf and the university which helps a lot,” he said.
It’s not just tourists and students sampling Greyfriars’ international beer menu, however.
Locals are also said to be developing global tastes.
“Some locals go on holiday and drink the beer they tried when they come back,” added McClements. 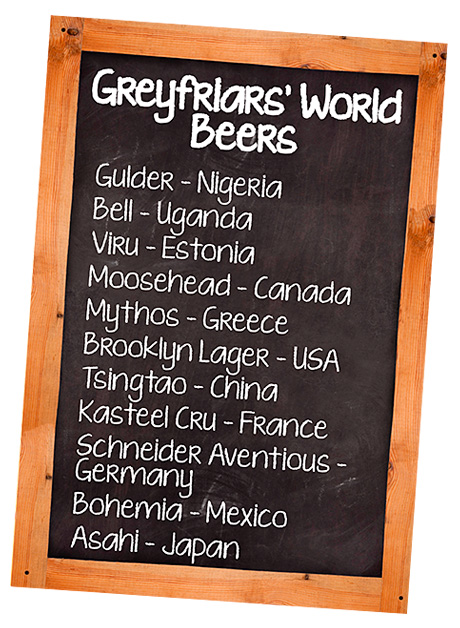