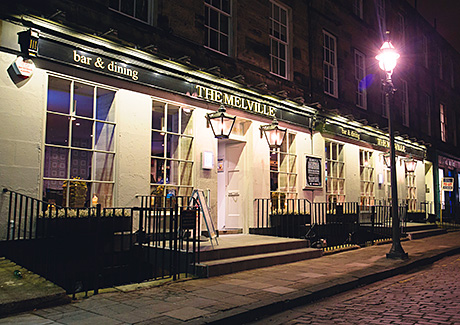 MALCOLM Gray admits he and business partner Jon Eastwood were a “bit selfish” when it came to refurbishing Edinburgh bar The Melville.

In fact he concedes they “basically created a place we would like to go”.
But then the pair, who also operate the Earl of Marchmont pub under a Punch Taverns lease, never intended to acquire a second pub.
Property development was their main focus – a business which had taken them all over the world, most recently working in Japan.
However, having returned to Edinburgh, a chance trip to Malcolm’s former local last year was to change all that.
“I went to Bert’s Bar for a pint and to watch the football,” Malcolm told SLTN last week, “but it was really busy so I thought I would go next door to The Melville.
“I used to drink in The Melville 20 years ago and it was the place to go, but it was closed. I thought then that if I was going to take on another pub this would be it – my old local.

We spent a lot of money revamping the cellar. It’s the bit that people don’t see but it’s hugely important.

“Pubs weren’t the main focus of our business but we’ve spent time in different bars as customers and we had said in the past how we would like to run a bar. When we took on the Earl of Marchmont last year, we got more involved and got our personal licence holder certificates.
“We had been asked if we would consider taking on another pub but we weren’t really interested at that time.
“But when I saw The Melville was closed I thought it was a chance for us to bring it back to life again.”
The pair acquired the William Street pub on a 15-year lease from London Town and embarked on a three-month refurbishment late last year.
Calling on their experience as property developers, Malcolm and Jon assembled a team of suppliers and tradespeople, including Ambience Designs, Main Contracts and Seeland System Integration, to work on the root and branch revamp, which ultimately cost £250,000.
The 120-capacity outlet was stripped out and refitted in a “contemporary” style, with light, natural decor, high-backed leather fixed seating and mirrors. A dark wood bar top was installed and a new glass and mirror gantry built to house the vast range of spirits.
Technology played a major role in the redesign of The Melville. 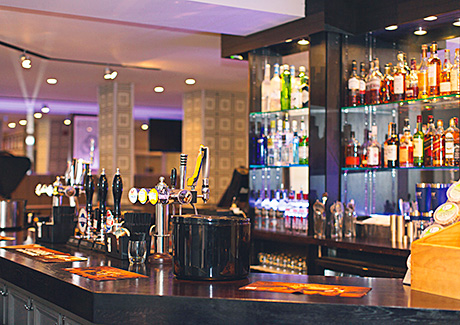 Design and consultancy of the “smart” technology system was provided by GO4 Control in conjunction with electrical contactors Seeland Systems, meaning everything from the room and cellar temperatures to the volume of music and level of lighting in the pub can be controlled remotely via an iPhone or iPad; mood lighting is set to change automatically at different times of the day.
Malcolm said atmosphere is ‘key’ to the new-look Melville.
“Ambience is so important in a bar,” he said.
“It’s all about creating the right atmosphere.
“We’ve added candles on all the tables and in the windows, which are lit at night, and the lights can all be pre-set for different times of the day.”

Outside, the exterior of The Melville was spruced up, with the previous dark red frontage painted cream and new signage added.
But the refurbishment didn’t just focus on areas that are visible to customers.
The kitchen was stripped out and refitted with new stainless steel units and appliances. And, with help from main beer supplier Molson Coors, the cellar was completely overhauled, including the installation of a ‘smart’ system and three new pythons.
“The cellar was completely redone,” said Malcolm.
“It probably cost about £10,000 to do, which is a lot of money.
“It’s the bit people don’t see but it’s hugely important.”
To fit with The Melville’s contemporary new look, Malcolm and Jon also revamped the offer.
Beers on tap include Cobra, Singha, Erdinger, Tennent’s and Peroni; there’s also a broad range of spirits, including a large number of malt whiskies; and a cocktail list, featuring drinks like the Espresso Martini and Japanese Slipper.
On food, The Melville offers a menu of gastro pub-style dishes and sharing platters (see box below).
The bar is also staging a number of new events, including a weekly Cocktails and Canapés night and a Curry Club.
It’s an offer that’s credited with attracting a broader clientele to The Melville since it opened on February 14.
“The west end of Edinburgh is a business district so we want to appeal to that lunch-time and after work crowd,” he said.
“But we also wanted the bar to attract groups of women for cocktails. And we’ve still got Sky Sports and flat screen HD TVs to show sport on.
“Jon and I basically did The Melville as somewhere we would like to go. We’ve been selfish in a way; we’ve made it somewhere we would like to go for a pint or to take the family for Sunday lunch.
“Twenty years ago The Melville was the pub to go to and we wanted to get that back.
“We’ve not done any advertising yet, it’s all been word of mouth.
“We’ve only been open five minutes but we’re starting to build up local trade; it’s going really well.”
So much so that the pair are already considering pubs three and four.
“We are talking about one or two others,” added Malcolm.
“It’s all about location but we’ve got our eyes on a couple at the moment.”

Images – Top, The exterior of The Melville was spruced up with a fresh coat of paint and new signage. Above, As part of the refurbishment of The Melville, a new bar top was installed and a glass and mirrored gantry was built to house the vast range of spirits. 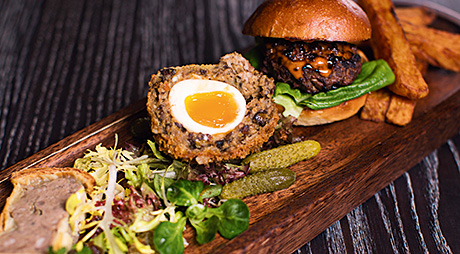