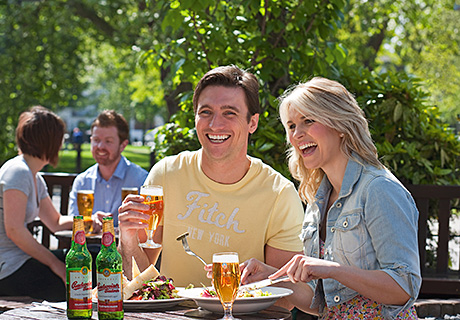 THE firm behind Czech beer Budweiser Budvar has launched two new beers in the Scottish on-trade.

Described as “Budvar Original with a go-faster stripe” due to its ABV of 7.5%, which is achieved through a lagering period of 200 days, Bud Premier Select is available in a 330ml bottle from drinks supplier Inverarity Morton.
The new beer is batch-brewed in separate tanks – a move Budvar said maintains quality but means each batch is slightly different.
In other respects, Bud Premier Select is said to share many characteristics with the Original variant – it is brewed at source from whole Saaz hops, the malt is made from spring barley grown in the Hana valley in Moravia, yeast is taken from a strain resident at the brewery since 1895, and the water used is drawn from 300 metres under the brewery.
Jill Sutherland, head of Budvar’s operations in Scotland, said Bud Premier Select will appeal to “mainstream drinkers and beer aficionados” alike.
“Bud Premier Select really adds a new dimension to the possibilities of lager conditioned beers,” she said.
Budweiser Budvar has also introduced its non-alcoholic beer in Scotland.
Available in the Czech Republic since 1992, the non-alcoholic beer is said to be brewed in line with Budvar Original, using the same hops, malt and spring water. It’s available in a 330ml bottle from Inverarity Morton and Wallaces Express.
News of the two new beers came as Budvar revealed its draught yeast beer will be available to the Scottish on-trade in 30-litre kegs via Belhaven.
Unpasteurised and unfiltered, the 4% ABV yeast beer tastes as though it has just been poured from the brewery’s tap, according to Jill Sutherland.
“It’s a great lager,” she said, “and drinkers are going to love it.
“It’s brewed the same way as Budvar Original with the same 100-day brewing cycle but with the added bonus that it’s still alive.”

Image – Czech it out: Budweiser Budvar has launched two new beers and a customer loyalty scheme.