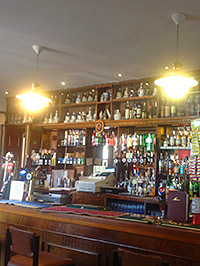 A HANDS-on approach, ongoing investment and dedication to customer service are credited with helping a family-run hotel stay in business for four decades.

The Oatridge Hotel in West Lothian, which is part of Punch Taverns’ estate, has been run by the MacGregor family since 1973.
Originally run by the late Alex MacGregor and wife Mary, the hotel is now operated by their son Gordon along with his wife Irene, son Gordon and daughters Sharon and Angela.
Over the last 40 years the family has carried out several refurbishments at the hotel, including upgrading the seven letting bedrooms and converting a former lounge bar into a restaurant space. On drinks, the hotel bar’s draught beer range includes Tennent’s Lager, Carling, Stella Artois, Belhaven Best, McEwan’s 60/- and Guinness.
Speaking to SLTN last week, Gordon (senior) said he has witnessed many changes in the trade – and he reckons the business is much tougher for operators now than it was in the past.
“It wasn’t a very busy pub when we first took it over but over the years we’ve managed to build up quite a good clientele,” he said.
“Trying to survive is the main problem now, with the economic climate.
“But we manage to keep going and we manage to keep a good customer base.”
Gordon reckons the family’s hands-on approach to running the hotel is one of the reasons it has remained popular with locals through the years.
“I think it’s just the fact that the people that are running the place are showing face and are here to meet the customers and talk to them,” he added.
The family is not resting on its laurels, however, working hard to broaden the hotel’s appeal.
“When we first came [to the hotel] it tended to be an older age group because it’s an old fashioned bar, a working man’s bar,” added Gordon.
“But over recent years, with my son coming into the business, he’s managed to make it attractive for a younger clientele as well. There’s quite a variety of folk we get in.”

Image – The bar at the Oatridge Hotel in West Lothian.