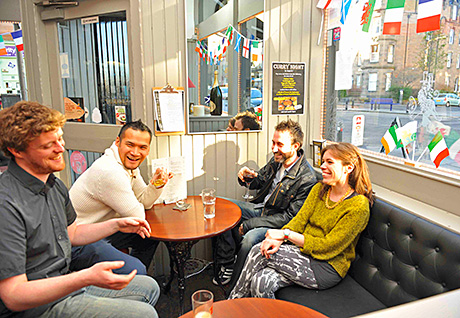 AN Edinburgh pub has become what’s claimed to be the first in the UK with a “futuristic” new heating system designed to look like wall mirrors.

Malcolm Gray and Jon Eastwood had the Infranomic system, from Bathgate-based energy saving firm Direct Savings, installed in their Earl of Marchmont pub, claiming it “ticked all the boxes on cost, comfort and style”.
Designed to look like wall mirrors, the Infranomic heaters emit ‘far infra-red’ energy, which is said to flood rooms with warmth, which is then absorbed into the walls, ceiling and floor. The heating panels, which use the same technology as special baby care incubators, can be designed to look like art work or mirrors.
Since it was installed, the new system is said to have cut heating costs at the Earl of Marchmont by 45%.
Co-owner Malcolm Gray said: “Despite our expectations of the system being very high, we’ve been hugely impressed with the results.
“Instead of unsightly radiators or fan heaters, we’ve got a set of smart mirrors that have become part of the interior design.”
Ged Smith, managing director at Direct Savings, said he is confident the heaters will become commonplace in homes and businesses in the near future. “Infra-red does not rely on convection power,” he said, “so that alleviates cold spots in a room and gives a constant warm environment, creating a very efficient heating system.
“This really is the future of heating. It has to be seen to be believed.”

Image – The new heating system at the Earl of Marchmont in Edinburgh is ‘disguised’ as wall mirrors.