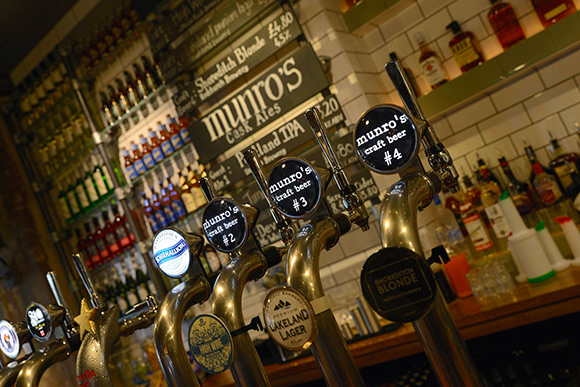 IT wasn’t Scotland’s dramatic mountains that inspired the name of Maclay Inns’ latest pub, but one of the building’s previous incarnations.

Back in the 1960s, the premises on Glasgow’s Great Western Road was occupied by car dealership Munro Motors. More recently, it traded as music pub the Captain’s Rest.
But it’s the name from its days as a car showroom that is back above the door of new craft beer bar Munro’s, which opened last month.
Maclay’s acquisition of the outlet late last year from Glasgow operator Colin Beattie was significant in more ways than one. Not only was it the Alloa-based pub firm’s first buy under the funding and supply deal agreed with Tennent Caledonian last March, it was also its fourth venue in the west end.
The new outlet’s proximity to sister venues Dram, The Lansdowne and cask ale pub the Three Judges had a major bearing on Maclay’s plans for Munro’s.
And so with the objective of creating a craft beer bar which would complement the offers at its other three venues, Maclay turned to its long-standing refurbishment partners – Design Build Deliver and Donaldson Construction of Alloa – to draw up plans for the new bar.
As Maclay MD Steve Mallon told SLTN at Munro’s last week, the project, which got underway on December 1, 2012, was much more than just a revamp of the decor.
“It had been trading as a rock venue, focused on the basement level,” he explained.
“We wanted to maximise trading space on the ground floor by relocating a lot of the operations to the basement level so that there was no trading downstairs.
“We also took out the large island bar on the ground floor, removed part of the gable wall and put in much bigger windows. We were keen to open it all up but we also wanted to create nooks and crannies and different areas.
“Flexibility of the design is key. We don’t want to blandly be all things to all people but we need to be a lot of things to a lot of people.”
With the structural work complete, the focus shifted to the interior design, which Steve described as “shabby chic rather than just out the wrapper”.

We don’t want it to blandly be all things to all people but we need to be a lot of things to a lot of people.

Reclaimed and recycled furniture – including tables and chairs from Maclay Inns’ Tullie Inn at Balloch, which is currently undergoing a major refurb – have been paired with fixed seating upholstered in a combination of brown or teal leather and tweed fabric. And large cable bobbins have been turned into high tables.
The blend of traditional and industrial materials has been continued in the bar counter, which is a combination of polished concrete and crafted elm by Paul Hodgkiss; and the lighting in the bar area, which combines spotlights fixed to a steel frame with a bespoke ‘chandelier’ made from old car tyres – a nod to the site’s Munro Motors days.
Elsewhere, exposed stone and brickwork sit alongside wood cladding, including in the snug area, which features a wood-burning stove, and sofas and Chesterfield-style armchairs around low-slung tables.
And there are some subtle references to Scotland’s Munros, even though the mountains did not inspire the bar’s name; a large painting by local artist Nichol Wheatley hangs in one of the other ‘nooks and crannies’ on the corner of the outlet and there is a portrait of Sir Hugh Munro, who produced the first list of the peaks and after whom they are named.
Michael Dunn, of Design Build Deliver, described the interior as “unusual and exciting”.
“It’s quirky and eclectic,” he said.
“It’s quite retro but it’s clever at the same time.”
Subtle nods to the Scottish hills don’t end with the decor.
Munro’s house craft beer is Schiehallion (the name of a Munro in Perth and Kinross) from Harviestoun Brewery; the house cask is Deuchars IPA.
The bar has a total of eight craft and cask taps, with six of the beers changed on a regular basis; it offers craft and cask taste ‘bats’ where consumers can try 1/3 pint serves of three different beers.
Also on draught are Tennent’s Lager, Munro’s Lager, St Mungo from Glasgow’s West brewery, Caledonia Best, Estrella Damm, Franziskaner Hefe, Guinness and Magners Golden Draught.
Beyond the draught offer, Munro’s stocks around 40 bottled beers, lagers and ciders as well as a range of wines and spirits, sourced from Bibendum and Inverarity Morton respectively.
On food, Munro’s majors in dishes like pizzas, burgers, hotdogs, sharing platters and ‘beer bite buckets’ of bar snacks like chicken wings, whitebait and stuffed jalapeños.
It’s an offer that seems to be going down well with the customers so far.
And Steve is equally pleased with the end result.
Acknowledging that, at £400,000, the revamp is a significant investment, he is confident Munro’s is set for success.
“Our biggest competitor is the home so we’ve got to offer things that people can’t get at home, like cask beer, smiley staff – that’s the key,” added Steve.
“We had huge confidence in the site and our offer but you never know until you open the door. It’s very early days but it’s been well-received so far.
“We have a brewing partner [Tennent Caledonian] and a lending partner [Bank of Scotland] and we are keen to move forward.
“These are tough times but we’re meeting it head on. You can’t afford not to invest. And there’s a great sense of satisfaction when you see a pub finished and customers in it enjoying themselves – that’s what it’s all about.”

Munro’s at a glance … 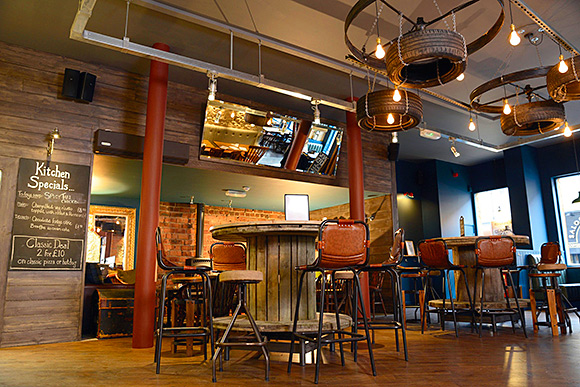 Images – Munro’s has eight craft and cask taps, with six of the beers changing on a regular basis. Munro’s interior blends traditional and industrial materials in a “shabby chic” design.