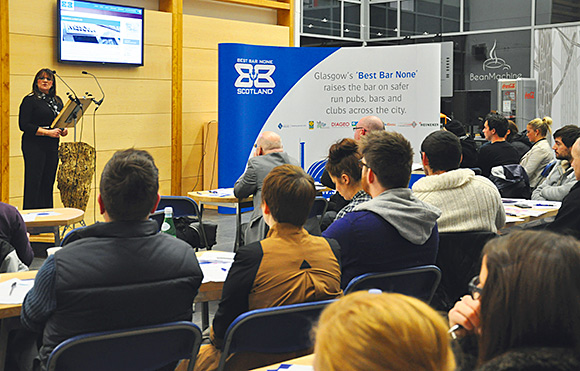 GLASGOW’S Best Bar None Awards is set to expand into the city’s east end this year.

The revamped 2013 awards will extend its reach beyond the city centre, west end and south side to take in bars and clubs in the east of the city.
This year’s safety standards awards scheme, which will be launched next month, will also include new categories for community pubs, hotel bars and restaurants.
Eleanor Lee of Glasgow Community and Safety Services (GCSS), which organises the scheme, said the new categories were introduced after feedback from the city’s licensing forum.
“Smaller independent venues have told us they previously felt unable to enter as they don’t have the same resources as bigger chains,” she said.
“With this in mind, we have created a new category with more suitable criteria for community-based pubs.
”We’d also urge licensees from the east end of the city to take part in the awards.
“Over the years, the awards have expanded to take in areas outside the city centre – we’re delighted to be able to include the east end this year and hope venues will come forward to take part.”
As well as seeking entries for the Glasgow awards, which is now in its ninth year, GCSS is inviting operators to join a new steering group which will look at ways to grow the scheme further.
The organisation also recently hosted a free training seminar in Glasgow.
Attended by representatives of Best Bar None award-winning venues, including The Cathouse, Campus and The Arches, the seminar featured talks by Strathclyde Police. Among the topics covered were the duty of care that licensees have to customers, including those who have left the premises.
“After supplying them [customers] with alcohol, they also have a vicarious duty to ensure people, especially the vulnerable, are safe when they leave,” said sergeant Scott Cameron.
“For example, if an intoxicated person has caused trouble in the premises they can’t simply put them out and leave them alone with their friends still inside. Depending on the circumstances they should find their friends and get them to look after them, call a taxi to take them home or contact the SOS bus, if it’s available, for help.”