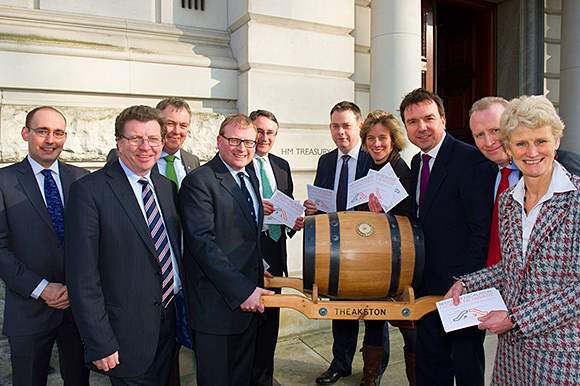 A NEW campaign calling for the chancellor to freeze alcohol duty and scrap the controversial ‘escalator’ at this month’s Budget has been backed by trade and business groups.

The Wine and Spirit Trade Association (WSTA), the British Beer & Pub Association (BBPA), and the Forum of Private Business (FPB) have welcomed the Mash Beer Tax campaign, launched by the Tax Payers’ Alliance, which has seen thousands of beer mats highlighting alcohol duty levels distributed to pubs across the UK.
Consumers are also being directed to the campaign website (www.mashbeertax.org) where they can send a message to their MP to call on chancellor George Osborne to freeze duty and scrap the escalator at the Budget on March 20.
The controversial escalator, introduced by Labour in 2008 and continued by the coalition, increases duty by 2% above the rate of inflation.
Tax Payers’ Alliance chief executive Matthew Sinclair said the policy has resulted in beer duty increasing by more than 40% in the past four years.
“In opposition, Conservative and Lib Dem politicians were quick to decry the beer duty escalator for the burden it places on people wanting to enjoy a drink and the threat it poses to pubs up and down the country,” he said.
“They’re now in a position to do something about it.”
Miles Beale, chief executive of the WSTA, said alcohol tax rises are “crippling” pubs.
“It is important that we send a clear message to government that the only way to support the pub industry is to scrap the alcohol duty escalator immediately,” he said.
FPB head of policy Alex Jackman said: “Further increases to beer duty is pure folly, damaging to small business, and will ultimately destroy what is a lucrative sector that earns the Treasury £6 billion a year in duty and VAT.”
The Tax Payers’ Alliance campaign was launched as the BBPA, CAMRA and SIBA, along with 60 MPs, delivered a ‘message in a barrel’ to the chancellor calling for a duty freeze.
“Beer tax hikes are not raising more revenues for the government, and with a duty freeze we can create many more jobs,” said BBPA chief executive Brigid Simmonds.