JOHN Waterson was one of the great characters of the Scottish trade. Well-known and highly-respected, he had a successful career spanning more than 70 years.

Not only did he own some of Glasgow’s most famous pubs, but successful hotels, nightclubs and off-sales too.
A former president of both the Strathclyde and Scottish Licensed Trade Associations, John was also very active in trade politics. He was a past director of The Scottish Licensed Trade Benevolent Society, a member of The Incorporation of Maltmen in Glasgow, a past chair of Strathclyde Youth and formerly a member of the Children’s Panel in Glasgow. 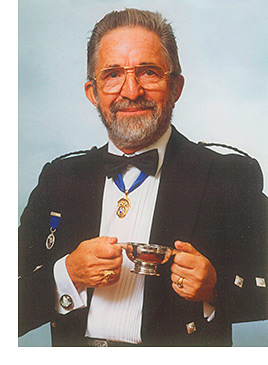 John Waterson was born in Great Hamilton Street in the Calton district of Glasgow in 1925. Not too much is known of his early years, although growing up in the Calton in the mid 1920s and ‘30s must have been interesting to say the least. He went to St Alphonse Primary School, but to suggest he had a good attendance record would be stretching the truth – he always said he was far too busy for lessons.
In 1938, aged 13, he popped into The Central Hotel in Glasgow on a whim to ask if there were any jobs. He was told that if the bellboy uniform fitted he could start the next day. It did, and so started a career that would last a lifetime.
His next step was as a waiter, and he learned his trade in various Glasgow hotels and restaurants. After the war he joined MacLauchlan’s the brewer, which employed him as a waiter in the famous Whitehall Restaurant on Renfield Street. Later he took charge of the cocktail bar and became an active member of The United Kingdom Bartenders’ Guild.
In 1957 MacLauchlan’s leased him The Moss-Side Inn in Paisley. This was very successful and in 1962 he bought his first pub – the run down Burns Bar in Govan.
On the face of it, it was perhaps not a great career move at the time – a Catholic buying a run-down Rangers pub in Govan, frequented by hardened dockers. On his first day the regulars came in only to tell him they had all barred themselves. By closing time he had sold two pints of heavy – one to a Catholic docker who wanted to meet the bravest publican in Glasgow, the other to the Jewish shopkeeper next door who wanted to meet the most stupid.
However, slowly but surely he worked his magic. Regular customers came back, the Rangers bus ran from the pub again, and within a year he had revamped the décor, filled it with Burns memorabilia and changed its name to Burns Cottage. It became one of only two pubs in Glasgow licensed for live music, and musicians flocked there in their droves.
John was one of the first to turn Scottish pubs into more than places to drink. He was involved in the Scottish music scene and between the ‘60s and early ‘80s gave a platform to many aspiring musicians.
He installed closed circuit television so patrons in the bar could watch the live bands in the lounge, which was revolutionary at the time. STV even broadcast a live talent show from the lounge on a Saturday night – a 1960s Scottish X-Factor from surely Britain’s first themed pub. He was always ahead of the game.
He opened his most famous pub, The Burns Howff in Glasgow, in 1967. Both the Cottage and The Howff played host to most of Scotland’s best musicians, including Maggie Bell, Frankie Miller, James Dewar, Alex Harvey, Simple Minds, Midge Ure, and The Average White Band. All played for John, although his relationship with musicians could be fraught. When one was interviewed he said he would never forget John for giving him his big break, but bemoaned the fact that he and his band were only paid £20 a night. John retorted that this was slander – he never paid any band more than £15!
Over the years till the mid-’90s, surely the golden age for the pub business, he also opened The Burns Howff in Renfrew and The Wee Howff in Paisley. Other acquisitions were McCalls Bar in Hope Street, which became The Pot Still. Much to his enjoyment he also bought The Whitehall, which became The Maltman, in 1982. The 39 Steps followed in 1986. That was the last pub John Waterson owned. He moved into hotels, first at the Gleniffer in Paisley then The Stuart and Bruce Hotels in East Kilbride and lastly The Golden Lion hotel in Stirling, which the family still owns.
Underpinning everything he was a licensed trade man, a publican through and through. Professional, disciplined and totally dedicated, he expected the same from everyone else. He instinctively knew what his customers wanted and always saw change coming – who else would have taken the chance and opened a no smoking bar, the successful Maltman, in 1982? He said he would never retire and never did, in fact he was still doing deals well into his 80s.
John is survived by his wife of 65 years Josephine, children Paul, Josephine, Jonathan and Mark, 11 grandchildren and 5 great-grandchildren. His eldest daughter Kathleen was tragically killed in a car accident in the USA in 1979.
He was always thankful that the bellboy’s uniform at The Central Hotel fitted him on that fateful day in 1938 – so was the licensed trade of Scotland and its customers.