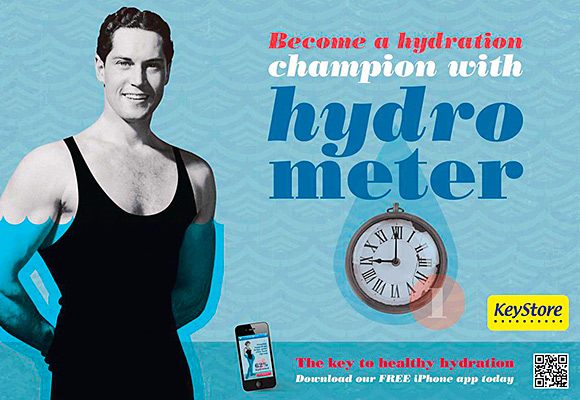 The free Hydro Meter app for iPhone was developed in collaboration with water brand Highland Spring to give consumers a way to monitor their water intake.
The technology shows users how hydrated they are by providing eight notifications throughout the day until they are 100% hydrated.
Using technology known as geofencing, the app also alerts shoppers when they are within 500 metres of a KeyStore and tells them about available Highland Spring promotions.
Consumers, who can download the app via a QR code on POS in store that takes them straight to the App Store, can also use it to post messages on Facebook and Twitter.
The app’s launch is being supported by a marketing campaign that includes a promotion on Radio Clyde and the distribution of 300,000 KeyStore leaflets across Scotland via POS material, including window bills and hanging signs.
Also, consumers who stay 100% hydrated using the app will have the chance to be named Hydration Champion and win prizes every month.
“The app has been in development since last year and forms part of a robust consumer-facing marketing strategy in 2013 which will see us working closely with our suppliers to offer keen deals and promotions that are exclusive to KeyStore,” said Filshill managing director Simon Hannah.
“We also have an increasingly active corporate social responsibility (CSR) agenda and view the launch of our new app as part of JW Filshill’s ongoing CSR programme of activity both at company and KeyStore level.”
When the app becomes established, Hannah envisages it being developed to incorporate areas of high footfall such as schools, universities, doctors’ surgeries, gyms and health clubs.
Bill Constable, national account manager at Highland Spring, described the partnership project as an “ideal collaboration”.