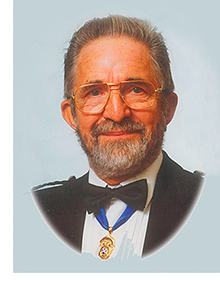 THE licensed trade turned out in force last week for the funeral of John Waterson, the pioneering Scottish publican and former president of the Scottish Licensed Trade Association (SLTA).

John, the father of SLTA chief executive Paul, passed away peacefully at home on January 23 aged 87.
Hundreds of mourners, including publicans, drinks industry representatives and members of the SLTA’s Strathclyde branch, attended the requiem mass at St Mary’s RC Church in Paisley on January 30.
The congregation heard Paul speak movingly of his late father, who was born in Glasgow’s east end in 1925 and went on to build a reputation as one of the trade’s most innovative operators.
In a career that would span more than 70 years, he launched his first pub, Burns Bar (which he renamed the Burns Cottage) in Govan in 1962, and followed it with the Burns Howff on Glasgow’s West Regent Street in 1967.
Both the Howff and the Cottage became synonymous with live music and are credited with launching the careers of major stars of the era, including Maggie Bell and Frankie Miller.
At the Cottage, live music was relayed to customers in the bar via closed circuit television from the lounge, where the bands played. An STV talent show was also broadcast from the pub.
Paul said success of the Burns-themed pubs convinced his father that the bard was a “lucky talisman”, and references to the ploughman poet would adorn subsequent pubs, including the Jean Armour in Shawlands, which the family built from scratch and opened in 1977, and Glasgow city centre pubs The Pot Still (1979), The Maltman (1982) and The 39 Steps (1982). The Maltman was one of Scotland’s first no-smoking pubs.
The Waterson family exited pubs in 1992 and moved into hotels, buying the Gleniffer Hotel a year a later, the Stewart Hotel in East Kilbride in 1994, and the Bruce Hotel, also in East Kilbride, in 2002.
Paul recalled how his father had also agreed to buy the Golden Lion hotel in Stirling in 2002 on account of Burns having stayed there in 1787 and etched two lines of a poem in a window – without having set foot in the building.
“Underpinning everything he was a licensed trade man,” Paul said. “A publican through and through – professional, disciplined, totally dedicated, and he expected the same from everyone else. Working for him was a masterclass in running a pub, running a business and all done with a confidence and eccentricity that made him a character, a one off. And never, and I mean never, a dull moment.”
John is survived by wife of 65 years Josephine, sons Paul, Jonathan and Mark, daughter Josephine, 11 grandchildren and five great grandchildren.