EDINBURGH chef Paul Kitching was the toast of the UK dining scene last week after his 21212 restaurant was awarded more AA rosettes than any other in the country.

The restaurant, which Kitching established with partner Katie O’Brien in 2009, is the only one in the UK to boast four rosettes in the 2013 edition of the prestigious guide.
The chef, who named the restaurant after his menu format (diners can choose from two starters, two main courses and two desserts, with tasty morsels served in between), was praised by AA inspectors for his “exciting, artful, complex, even confrontational” cooking that “defies easy classification”. 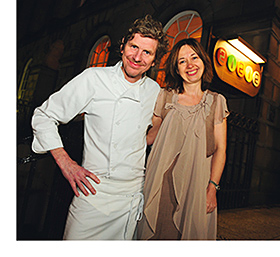 Only five other restaurants in Scotland – Andrew Fairlie at Gleneagles, Martin Wishart and Tom Kitchin in Edinburgh, and Charlie Lockley at Boath House in Nairn – are lauded by the guide to the same extent.
But it’s not the first time Kitching has scored so highly with the AA, having won four rosettes for Juniper in Manchester in his time there.
“I’m thrilled,” said the chef in a statement released before going on holiday last month.
“The four AA rosettes are a real boost to all the staff in recognising what we’re doing here at 21212.”
The restaurant’s achievement drew praise from Andrew Fairlie, currently ranked the UK’s top chef by The Sunday Times/Harden’s.
“I’m delighted for Paul, Katie and the team at 21212 on their latest award,” he said.
“It has been great watching the restaurant develop over the years.
“I have enjoyed many great meals there over the years and this is testament to Paul’s skill in the kitchen and Katie’s approach to relaxed and professional service.”
Based on Edinburgh’s Royal Terrace, not far from the Playhouse and the top of Leith Walk, 21212 is a 38-seat restaurant with open kitchen, drawing room, private dining space and four luxury bedrooms.
Kitching, O’Brien and their investors are said to have spent £4.5 million to restore the property to its former glory.

Image – Kitching and O’Brien opened the Edinburgh restaurant in May 2009.