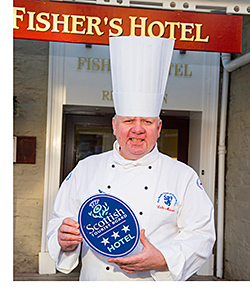 CHEF Colin Masson has swapped Glasgow city centre for Highland Perthshire after taking up a new role at a Pitlochry hotel.

Colin, whose career in the hospitality industry spans more than 35 years, has joined the three-star Fisher’s Hotel as head chef from Mark’s Hotel on Glasgow’s Bath Street.
Having originally trained in Aviemore at Thistle Hotels, Colin went on to work in such prestigious venues as Gleneagles, the Balmoral and the St Andrews Golf Hotel, where he was based for ten years.
Colin said he was delighted to take up the role at Fisher’s, which has undergone a £3.4 million upgrade since it was bought over by Dublin-based Castle Hotel Group in July 2011.
“It’s great to come on board at a time like this,” he said.
“We have just received our official three-star rating, which is a sign that we are doing everything correctly and generally have turned this hotel around in terms of food, service and quality of accommodation.
“I have a great team on board – in the busy summer months I look forward to having a team of ten working with me in the kitchens.
“This is my first hotel in Highland Perthshire and it’s an area with a wealth of local produce at my disposal.
“Our cuisine here is traditional with a twist at Fisher’s and we want to do traditional really well – our guests expect that and we won’t be disappointing them.”