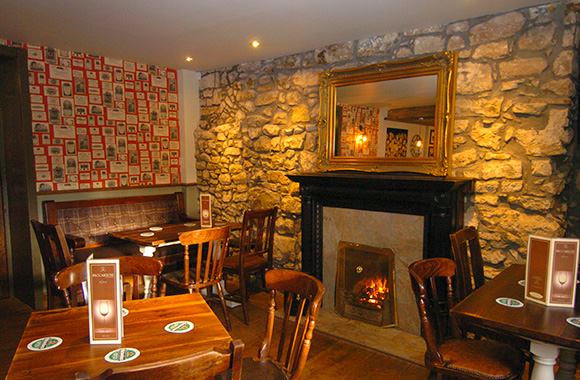 CREATING an interior which marries contemporary elements of design with the original features of an old building can be a tricky balance to strike.

But it’s one the team at the Riccarton Inn in Currie, on the outskirts of Edinburgh, reckon they have got just right.
The four-week, £170,000 revamp last October was as much about breathing new life into the outlet, as retaining the look and feel of a traditional inn.
As Gillian McIntee, who runs the Star Pubs & Bars leasehold outlet with Ben Smith, explained to SLTN last week, the age and style of the property – coupled with its location – influenced much of the interior design.
“It is in a village setting and it’s an old building so we had to be sympathetic to that,” she said.
“We couldn’t go too contemporary.”
The couple took on the Riccarton Inn a little earlier than planned, having plenty to be going on with at the Kinleith Arms in nearby Juniper Green, another Star Pubs & Bars lease which they acquired in 2004.
They always hoped to take on a second outlet, just not so quickly. But when the pubco approached them about the then Riccarton Arms they jumped at the chance.
“We were in a Catch-22: it was a couple of years earlier than we had planned to take on a second pub but we thought we might never get the opportunity to take on a pub so close to the Kinleith Arms so we decided to go for it,” Gillian explained.
“We know the area and we knew it had potential.”
The lease was signed last February and, with refurbishment on the cards from the outset, the operators continued to trade the pub as was while plans for the new design were drawn up.
They then shut the doors for four weeks while the work, which cost £170,000 (£140,000 funded by the brewer), was carried out.

It’s an old building in a village setting so we had to be sympathetic to that. We couldn’t go too contemporary.

The result is a blend of exposed stonework and wooden beams with contemporary fabrics and furnishings.
The bar features oak flooring and an oak bar counter with wood and glass gantry, exposed stone walls and wooden beams. It’s furnished with a combination of booth seating upholstered in dark brown leather, loose tables and chairs and high stools, which are upholstered in leather and different tweed fabrics.
In the 34-cover dining area, a contemporary striped carpet has been paired with mismatched tables and a range of tweed-clad chairs and fixed seating, upholstered in a combination of leather and tweed.
“It’s very calming,” said Gillian.
“There’s lots of natural stone and we have two working fires.
“We used lighting to create atmosphere.”
It’s not just inside the pub that modern design has been successfully married with more traditional elements.
A contemporary glass and wood decking area, with views of the Pentland Hills, has been added at the front of the property.
And the name has been changed from the Riccarton Arms to the Riccarton Inn – a move that was intended to both highlight the changes at the pub and promote the five letting bedrooms, which Gillian and Ben are refurbishing in phases.
“We wanted to change the name to reinforce the changes,” said Gillian.
“But it’s known as the Riccy locally and we could never have taken that part of the name away.”
It seems the revamped Riccarton Inn has gone down well with locals and customers from further afield.
Trade is up since it reopened in November and Gillian said feedback has been very positive.
“We had built up the business before the refit so it was slightly daunting to close for four weeks but it’s been great,” she said.
“The time before the refurbishment gave us a chance to learn [about] the pub and the layout and train the staff, which is just as well because it’s been so busy since we reopened.
“And it was worth it in the end. [Being closed] created lots of interest in the area.
“And the new decking, which is lit up at night, has been the biggest advert we could have had.
“Obviously you have to take Christmas and New Year into account but sales are 60% to 70% up and we’ve gone from doing 20 covers a day to 120 a day since the revamp.
“I still walk in every day and think ‘wow’.” 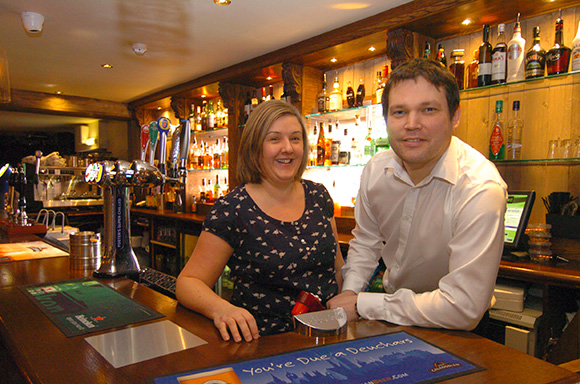 Images – Gillian and Ben said they couldn’t have passed up the opportunity to take on the pub.