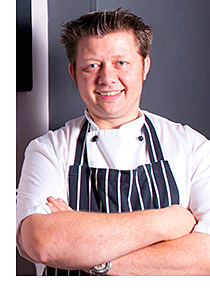 AN award-winning chef has returned to the kitchen after relocating his restaurant to an historic Georgian building in Edinburgh.

Mark Greenaway closed his eponymous restaurant at No. 12 Picardy Place in November as the business prepared to move across the city to North Castle Street.
His new venue, which has been renovated using interior and architectural designs from Four-by-Two’s Adam Storey, reopened on January 18.
Greenaway promises to continue his modern approach to classic cuisine and said he was “very fortunate” to have retained his staff and suppliers during his short break from the kitchen.
“I look forward to welcoming new and existing customers to my new premises,” he said.