A LONG-standing campaigner for pubco reform welcomed the move by business secretary Vince Cable last week to make the country’s biggest landlords accountable to government in their relationships with tenants, saying it could signal a brighter future for hard-pressed leaseholders in Scotland.

Cable surprised industry watchers when he announced that the Coalition would consult on putting the code of practice that sets out the pubco-tenant relationship on a statutory footing in the spring. The Lib Dem minister also confirmed plans to appoint an independent adjudicator to address unfair practices in the industry.
The news came shortly after Jo Swinson, minister for employment and consumer affairs, handed the industry a pre-Christmas deadline to show it had made progress on a series of key recommendations made by the government following a report by MPs on the select committee for Business, Innovation and Skills in 2011. 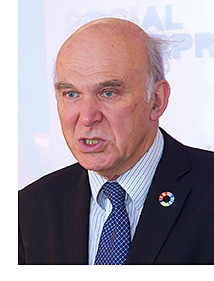 As well as putting the code, which would apply to pubcos with more than 500 tied leases, on a statutory footing and appointing an adjudicator, Cable has committed to preventing abuses of the beer tie, based on the principle that a ‘tied licensee should be no worse off than a free of tie licensee’.
“I believe if this all goes ahead and we get this statutory power, and it makes leaseholders equal to freeholders, then I could see this being the start of the revival of the great British pub,” said Lynn Adams, tenant at The George in Hamilton.
“The reason is that we would all be competing on a level playing field, whereby pricing structures [for tenants and freehold operators] would be the same.
“It’s going to take years, but it could be the start of the revival of the pub.”
Adams confirmed the SLTA was planning to meet Swinson to communicate its views ahead of the consultation.
“He [Vince Cable] has certainly committed that it [the code] will be statutory – it’s just what goes into it,” she said.
“That’s where we have to work hard to make sure we get the right content to protect the tenants and leaseholders.”
Cable was due to be questioned on the topic by the BIS committee this week. Member Ann McKechin, the Labour MP for Glasgow North, said the committee would be urging the government to act quickly.
“We’re concerned that if they put it out to consultation it sticks it away for a couple of years,” she told SLTN.
“We’re likely to say [to Cable] ‘why not draft the legislation and consult at the same time?’
“We want to see the government take action on this quickly and hopefully have a Bill before the Queen’s Speech in May. If they [government] accept our recommendations the onus is on them to make it happen.”
The British Beer and Pub Association said it was disappointed the industry hadn’t been given more time to self-regulate, pointing to the introduction of the Pubs Independent Rent Review Scheme and Pubs Independent Conciliation and Arbitration Service as examples of progress in this area.
The lobby group said appointing an adjudicator would be costly, and that putting the code into statute would bring “unnecessary red tape”.