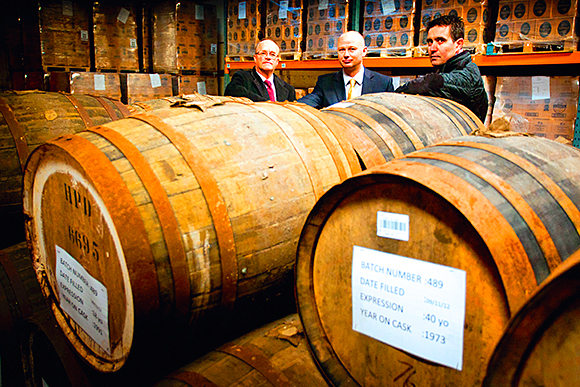 HARVIESTOUN Brewery is to extend its range of craft beers and launch a new 33cl bottle size under a major expansion drive.

The Alva-based brewery, which recently doubled the size of its warehouse and office space, was set to bottle the first batches of 4.2% ABV Bitter & Twisted and Schiehallion, which has an ABV of 4.8%, in 330ml format as SLTN went to press. The beers are already available in a 500ml bottle size and in cask and craft keg formats.
Harviestoun MD Chris Miller told SLTN the new bottle size is being introduced with food-led pubs and specialist independent off-trade retailers in mind.
The brewer also plans to bolster its range of beers with Atlantic Pale Ale, which it aims to launch at Easter, and a second beer later in the year.
Harviestoun also aims to recruit a further six members of staff, which would take its total workforce to 25.
Plans for the expansion come after the brewery more than doubled the size of its office and warehouse facility in Alva.
The six-figure project, backed by funding from Clydesdale Bank, saw Harviestoun acquire the neighbouring building to its existing 10,000 sq ft premises and remodel it to add a further 11,000 sq ft of office and warehouse space.
Harviestoun has also boosted its brewing capacity over the last year.
Miller said the expansion is a natural step for the company, which was founded 30 years ago and has been under independent ownership since 2008.
“This is further good news for us and the local community as it means we will be supporting yet more local jobs,” he said.
“2013 promises to be an exciting year for Harviestoun and we look forward to welcoming our new staff at this time.
“Our ethos has always been to be recognised as the best rather than one of the biggest mass producers, which is evidenced by the quality and popularity of our craft beers.
“Since moving to Clydesdale Bank, we have been impressed by the support and commitment which we’ve received to help deliver our business aims.”
Clydesdale Bank’s Stuart McCallum said: “Harviestoun Brewery is a strong Scottish company, producing a traditional Scottish product with a twist.
“It is extremely pleasing to see the company’s expansion continuing in to 2013 and beyond.”