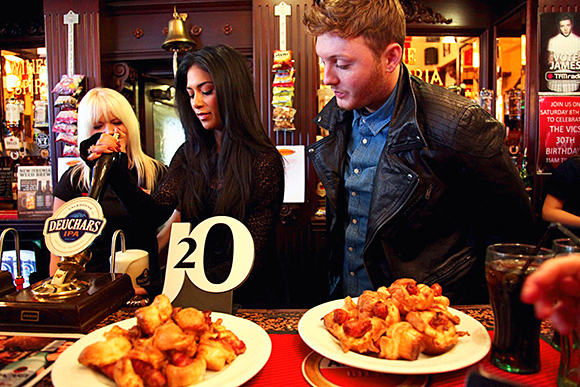 DEUCHARS IPA has added X Factor winner James Arthur and Pussycat Doll Nicole Sherzinger to its fanbase after the two were pictured pulling and drinking pints of the beer over the festive holiday.

James and mentor Nicole visited his local, The Victoria in Saltburn, North Yorkshire, to be photographed for a fundraising calendar for homeless charity the Doorways Youth Project.
Stephen Crawley, boss of Edinburgh’s Caledonian Brewery, pledged to arrange a tour of the brewery where Deuchars is made for the pair the next time they visit Scotland.
“It’s fantastic to hear that James and Nicole can be added to our list of Deuchars IPA fans and it just goes to show that it’s a beer that can be enjoyed by all – not just the traditional ale drinker,” he said.

Image – Cat that got the cask: Nicole Sherzinger and James Arthur pull a pint.