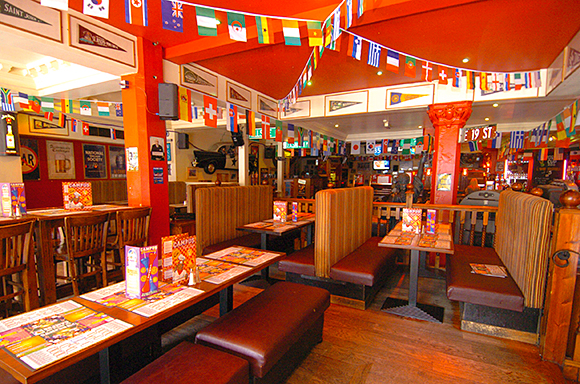 ASK Carlo Citti what he reckons is the secret to the success of his Glasgow student venue Campus and he’ll say there’s no single answer.

As bars and clubs in the city’s Sauchiehall Street have come and gone, Campus has endured at the heart of the late night circuit for more than seven years now.
Citti credits hard work, loyal staff, including operations director Gavin McGreish and marketing director Cammy Craig, ongoing investment and support from suppliers for helping sustain the venue in what is an increasingly competitive market.
A commitment to safety and social responsibility from day one, coupled with a varied programme of live sport and entertainment, have also played a key role in the longevity of the American college frat house-themed bar and club.

The judges were impressed by the clear systems in place. Campus was a well-deserved winner – Ross Donnell, Diageo.

Campus, which won the SLTN Social Responsibility and Year of Sport Awards for 2012, has had safety at the top of its agenda since Citti launched the venue in 2005.
Plastic and toughened glass has been voluntarily used since day one, safety messages are broadcast in the venue, and a thorough programme of training for staff and in-house stewards are among the steps taken to make the customer experience as comfortable and enjoyable as possible.
Major investment was also made in 2011 in a state-of-the-art ID scanner. The Scannet system, which was also installed in sister Sauchiehall Street venue O’Couture, requires customers to register their passport or driving licence and provide a thumb print. It means they’re only required to provide a thumb print when they visit to verify their age thereafter.
The system, which can detect fake ID, now has more than 20,000 people registered on it and has helped stewards enforce challenge 25 age verification legislation, which came into force on October 1, 2011.
Added to Campus’s involvement in wider activities like the night radio network, and the other measures that are in place, Citti said the technology ensures people feel secure at the 1000-capacity venue.
“Social responsibility has been at the heart of Campus from the start,” he told SLTN.
“It has to be, because if customers didn’t feel safe they wouldn’t come back.
“We’ve got about 16 stewards at Campus, who are all in-house, passionate about their jobs and they know what we’re about and how we conduct ourselves. And the staff are very vigilant.
“The award recognises the hard work done by the staff and managers every single day.
“The ID scanner helps us look after customers even further.
“It also gives us and the customers confidence that we know the people in the venue.”
It’s not just in customer safety that technology is helping keep Campus ahead of the game. Citti’s investment in multiple big screens, including HD and 3D technology, ensures it’s one of the city’s busiest destinations for live sport.
Food and drink are themed to tie in with sporting events and the venue also stages sports quizzes and other activities before the action starts.
Concerted efforts are also made to attract fans of visiting teams.
“We’re very proactive when there are foreign teams visiting,” he said.
“In the past we’ve had fliers printed in Spanish, and we contact visiting fans through Facebook and get PRs at the airport when they arrive.
“We do themed food and drink and a quiz to create a bit of a buzz and atmosphere.
“There has to be interaction with the customers, you can’t just open the doors and switch on the TV.”
The entertainment extends well beyond live sport, though.
Since its launch, the venue has staged appearances by a range of famous faces, from Big Brother winners to the likes of Roy Walker, David Hasselhoff and Peter Andre.
Campus has also established itself as the ‘official home’ of the X Factor in Glasgow, featuring performances by contestants the week after they are knocked out; last month’s line-up included Union J and Rylan, with each staging a family show on the Sunday afternoon ahead of the main performance at night.
Citti, who launched a Campus venue in Aberdeen last September and has taken over the Budda outlet on Glasgow’s Sauchiehall Street, which he aims to relaunch later this month, said the live entertainment programme gives the business an edge in tough trading conditions.

Campus left its competitors on the starting blocks and is one of Glasgow’s premier sports viewing destinations – John Gemmell, Heineken UK.

“We’re being hit from all angles – rates, two or three price increases a year, PRS and PPL fees, Sky bills,” he added.
“Cheap alcohol prices in supermarkets aren’t helping but I think minimum pricing will help. And overall I’m optimistic.
“Most places in Glasgow are safer than ever and that’s because everyone – the trade, police, LSOs and council – are working together for the same goal: to make the city safer.
“A safer Glasgow is a busier Glasgow – that’s the crux.”

Images – Customer safety has been paramount at Campus since Carlo Citti launched the venue on Sauchiehall Street in 2005.