Operators aim to bring back the glory days at The Stag 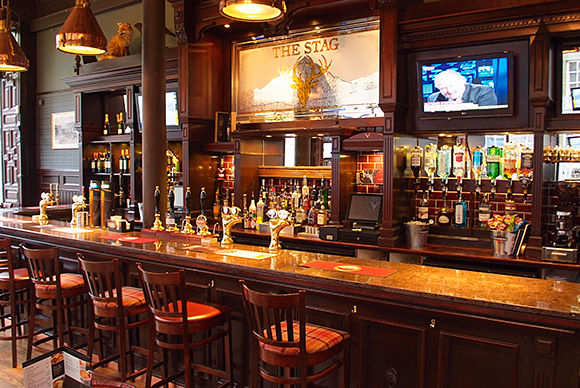 A NEW chapter has opened in the story of one of Aberdeen’s most cherished pubs.

The Star & Garter has endured more downs than ups lately, its halcyon days of the ‘50s and ‘60s giving way to a more troubled period in recent years.
But thanks to the faith shown by a group of local operators the pub, which relaunched as The Stag last month after lying empty for two years, is on the cusp of happier days again.
Alan Aitken, one of three shareholders who also own McGinty’s Meal an’ Ale at the other end of Union Street, is hugely excited to have revived a bar that holds a special place in the hearts of many Aberdeen pub-goers.
“Going back as far as the ‘50s and ‘60s, this bar was the place to be seen in Aberdeen – it’s one of Aberdeen’s four or five iconic bars and it was lying in a state of disrepair,” he told SLTN.
“Unfortunately, no one has really invested serious money in it for maybe as long as 20 years.
“Myself and the other directors feel that it’s probably the most prominent site in Aberdeen. It’s a fantastic location – it’s genuinely in the heart of Aberdeen, 20 paces off the main drag [Union Street]. It’s just got limitless potential, it really does.”
Alan’s faith in the pub stems not just from its positioning, across from the Music Hall and to the rear of The Grill, another famous Granite City pub.
The affection generated by news of its revival has also fed his confidence, as have the architectural gems he and his partners unearthed as they set about restoring the premises.
In that respect it’s perhaps surprising to hear that previous operators failed to make the most of its potential.
According to Alan, the pub had been run with limited success under different guises by various tenants in recent years, and was in liquidation when he and his fellow investors bought the freehold in March this year.
Other parties did show interest in the site but, while they wavered, Alan and co, who invested a total of £500,000 in the project, needed no second thoughts.
“I know a few other operators had looked at it,” he said. “But when we got the keys we genuinely felt the architecture was in the building – all we had to do was strip out the garbage and the dross that was lying around and bring back the parts we could work on.
“There’s some fabulous, ornate stained glass windows and if you were to buy the gantry now it would cost you £50,000 or £60,000, that’s how impressive it is.
“The ceiling and wood panelling are fabulous… it’s got everything a real traditional bar really needs.”
The operators aren’t relying on the bar’s aesthetic appeal to make it successful, though. A strategy encompassing quality food and drink, entertainment, value for money and great customer service – similar to the strategy that has worked successfully at McGinty’s – will be employed to keep the Aberdeen public happy.
Alan told SLTN their experience at McGinty’s shows that today’s consumer appreciates “traditional values”. “For us, customer service is so important, [as is] getting the right package and making sure you’re strong in all areas – food, sport, TV and so on,” he said.
“Our core offer is fantastic customer value, customer service and having a place that people want to come out of their homes for.
“But having a fabulous building with atmosphere, even when the place is empty, is important.”
As for the pros and cons of opening a second pub in the Union Street area, Alan feels they are far enough apart for it not to warrant major consideration.
He said there’s enough going on around both that will allow them to build separate audiences.
“Union Street is a mile long, [so] to have a bar at the top and a bar in the centre is not going to make an awful lot of difference,” he said.
“We’ll have some people who will hopefully use both bars, but I think predominantly people will use one.
“We’ll try extremely hard to have a completely different set of staff and locals.”

Image – The original gantry at The Stag forms the centre-piece of the traditional Aberdeen bar’s new interior.