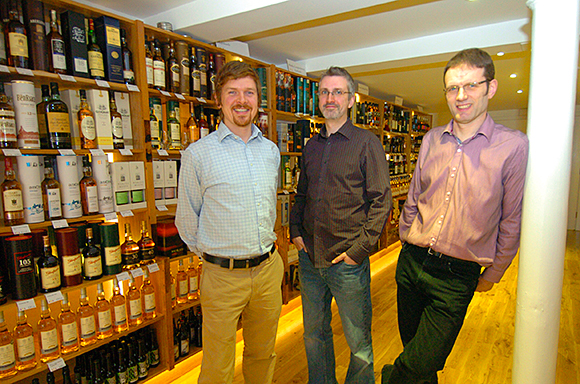 THE first day of advent marks, in the Christian calendar at least, the beginning of Christmas.

If you’re in the retail trade, the season tends to start a good deal sooner – and not just in the cavernous halls of Tesco, Boots and Marks & Spencer.
At The Good Spirits Co, the specialist off-sales store on Glasgow’s Bath Street, operations moved into Christmas mode at the end of October.
The number of events taking place in the shop’s tasting room, used by a mix of private and corporate clients, has doubled, footfall has steadily been rising and stock levels increased in anticipation of what should be its busiest time of the year.
Co-owner Mark Connelly, who launched the business, in the former 23rd Precinct record store, with Matthew McFadyen and Shane Goodbody in spring 2011, said Christmas is its most crucial period.
“This is the most important time of the year – basically we’re looking at [generating] maybe a quarter to a third of takings for the year over November and December,” Mark told SLTN.
“This is the time of the year when you have to pull out the stops and make all the money you can, because to a certain extent January, February and March are all ‘tumbleweed’, apart from Burns Night at the end of January.
“We need to make the money now to carry us into the new year.”
It’s perhaps not surprising to hear, either, that many of the store’s visitors at this time of year are people looking to buy something special, often for brothers, husbands and dads, and with a fixed budget in mind.
Mark said the “majority” of the store’s whisky sales will come from this source, with many such consumers spending around £30-£35 on a bottle of 10 or 12 year old malt.
“The standard 10 or 12 year olds all start round about that sort of price – that’s generally what people are looking for,” explained Mark, who is also a director of the Glasgow Whisky Festival, which took place at The Arches, Glasgow, in November.
“There’s the odd person who spends a bit more, quite often it’s on themselves, but the majority are around about that price point.”
To ensure the business makes the most of the festive opportunity, much of its annual marketing budget is focused on advertising in publications read by its target audience, including The Herald, The List and Scottish Field. The owners also welcome reps from drinks firms into their store on Saturday mornings to allow consumers to sample their wares.
“We normally do tastings every Friday night in our own tasting room in the shop,” Mark said. “In the run-up to Christmas, we’re doing two nights a week – Fridays and Saturdays – so we’ve doubled that up.
“We’re doing a lot of private tastings – a lot of people are booking the room for their own private Christmas parties.
“There will be at least two or three things going on in the tasting room every week from now until Christmas – it’s quite hectic.”
Amid so many positive signs, Mark is quietly confident that this Christmas will be a healthy one for the Good Spirits Co.
“Based on the last couple of months and the targets we’ve set ourselves, we should be absolutely blowing the budget come December,” he said.
“We’re pretty hopeful, unless there’s a big freeze like there was two years ago!”

Image – Three wise men: Mark, Matthew and Shane hope it will be a bumper Christmas.