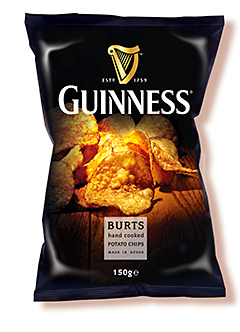 CONSUMERS can now enjoy a taste of the ‘black stuff’ in snack format.

Artisan crisp brand Burts Chips has joined forces with drinks giant Diageo to launch what’s claimed to be the ‘world’s first’ Guinness-flavoured crisps.
Flavour specialists from Guinness worked with the Burts Chips team for six months to create the new crisps, which are said to combine the flavour of the Irish stout with Burts’ thick-cut potato chips, resulting in a snack with a “strong, bitter sweet flavour”.
Leane Bramhall, marketing director at Burts Chips, said the collaboration of the two brands “makes a lot of sense”.
“As brands we both carry a reputation for quality and strong, distinctive tastes and take the time to achieve perfection in our products, a similarity that has formed the basis of this exciting partnership,” she said.
“We are confident that consumers will react very positively to the launch of Guinness Burts Chips.
“Guinness is one of the world’s most popular beers, enjoyed all over the globe – and everyone knows that there’s no better combination than a pint and packet of crisps, so a stout-flavoured crisp seemed the obvious next step.”
A spokesperson for Guinness added: “Following the success of Guinness-branded peanuts and cashews we’re very excited to be partnering with Burts Chips for our second launch into the UK snack market.
“We are confident that the product will prove extremely popular with current Guinness lovers and will also attract some new customers to the brand as crisps are currently selling extremely well to a whole cross-section of consumers.”