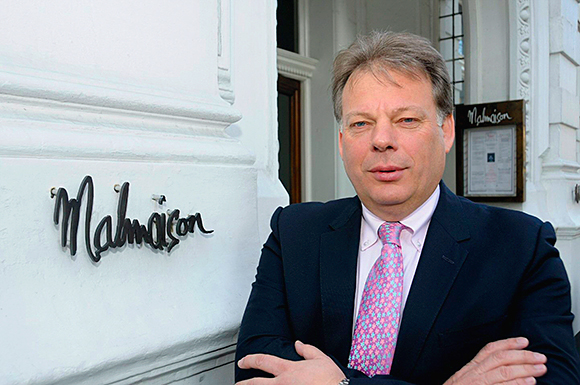 STRONG sales and profits have been recorded across the Malmaison and Hotel du Vin groups and the plans to expand both brands north of the border remain firmly on track.

Chief executive Gary Davis spoke out last week amid speculation over the future of both brands after shareholder MWB Group Holdings went into administration.
The hotel boss, who replaced Robert Cook in January, said Malmaison and Hotel du Vin are part of a separate operating company and have sustained “no impact” as a result of MWB Group Holding’s problems.
Davis said the Malmaison and Hotel du Vin businesses are performing well with like-for-like sales and profits up 14% in the last four months. In Scotland, where the company operates Hotel du Vins in Glasgow and Edinburgh and Malmaison properties in Glasgow, Edinburgh and Aberdeen, sales and occupancy levels are up in what Davis described as a “tough” market.
And the plans to grow both brands north of the border are said to be progressing well.
The new 100-bedroom Malmaison Dundee hotel, which will include a 110-cover brasserie with outdoor terrace, 200-capacity function suite and spa, is expected to open next September.
Work on a six week-project to convert the St Andrews Golf Hotel, which the company bought around four years ago, into a Hotel du Vin with bar and bistro is due to get underway in January; a further 23 bedrooms are set to be added to the property later next year, taking it to 45 rooms in total.
Davis confirmed the group is looking for a site to open a Hotel du Vin in Aberdeen, saying the two brands sit well together in the same city.
“They are very different brands and business models – Malmaison is much bigger, usually about 100-plus rooms, while Hotel du Vin is about 40-plus – but they do complement each other and work well together,” he told SLTN.
“In this economic climate, there are a lot of reasonably-priced properties around. The economy is helping us expand.
“It is a tough market but across all of our Scottish properties sales are up a couple of per cent and occupancy is up.
“Even in the current economic climate, when people spend money they want quality and value for money and we’re benefitting from that. We look forward to the exciting Christmas season and a successful 2013.”