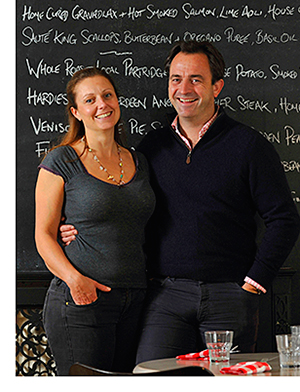 THE husband and wife behind the Buccleuch Arms Hotel in the Borders village of St Boswells have launched a new bistro in the building.

Rachael and Billy Hamilton created The Blue Coo Bistrot, so called after the locals’ nickname for the Buccleuch, in former staff accommodation at the 19-bedroom hotel.
The new bistro, which was designed by Rachael, aims to offer a “taste of the Scottish Borders”. Its menu, put together by chef patron Billy and head chef Gareth Gilder, includes locally-sourced lamb, beef, game and salmon. Billy said The Blue Coo, which has a side room for private dining, has a rustic atmosphere.
“We always planned to offer diners an alternative to eating in the bar and this allowed us to convert the redundant staff quarters into a modern and contemporary eating area,” he said.