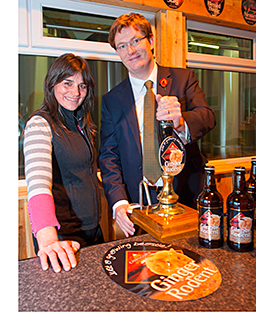 CAIRNGORM Brewery is set to build a state-of-the-art bottling hall as part of a £1.6 million expansion drive.

The plans were unveiled earlier this month by treasury secretary and local MP Danny Alexander, who visited the Aviemore business to sample its latest beer: Ginger Rodent – the term fired at the MP by Labour’s Harriet Harman in a party conference speech. Far from being upset by the jibe, Danny Alexander is said to be delighted at his association with Cairngorm’s latest brew.
The brewery’s expansion plans – backed by a £665,000 Bank of Scotland finance package and £150,000 from Highlands and Islands Enterprise (HIE) and £100,000 from the European Regional Development Fund – will include a purpose-built bottling hall, which will handle Cairngorm Brewery’s requirements and enable it to bottle beers for other breweries.
Samantha Faircliff, MD of Cairngorm Brewery, which opened in 2001, said the investment will be “pivotal” in the business’s growth programme.
“It is a huge step in our business life, but one we felt we had to take,” she said.
“Our business has grown considerably since our early days and it makes sense to do our own bottling here.”
Alexander described Cairngorm’s expansion plans are “hugely encouraging”.
“The investment here stands the company and the community in good stead and I look forward to it prospering,” he said.
“The new beer? Very nice. I’ll maybe take a couple of bottles down to Harriet Harman for her to savour.”