Master distiller looks for “disciples” to spread the word about category 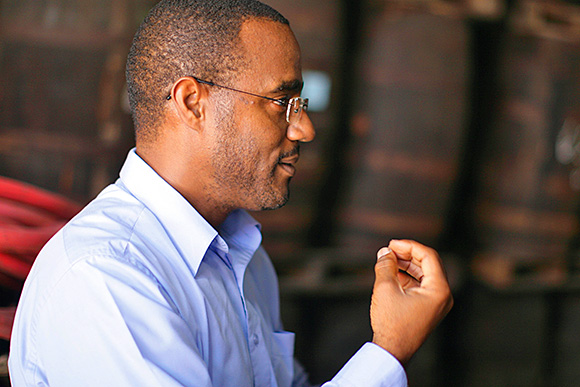 BARTENDERS have a crucial role to play if sales and knowledge of rum are to continue to grow in Scotland, according to the master distiller of a famous Caribbean producer.

Speaking to SLTN earlier this month, Angostura’s John Georges said educating bar staff about the merits of premium rum is key to moving the category forward.
“I interact with bar staff in different places and the goal is really to educate them,” Georges said. “What you’re getting behind the bar today are people that are interested in more than just the hype. These are intelligent, creative people who thrive on knowledge.
“They have all the skills to mix a beautiful cocktail. They can maintain a wonderful bar. They can advise someone who’s interested in trying something new, and while they’re serving it, tell them about it.”
Georges acknowledged that the rum category in the UK is still dominated by cocktails, and said the big challenge moving forward will be to create a “signature occasion” for premium rum to make its own.
“It’s really identifying the space where you can fit in a premium rum,” he said.
“How do you fit a premium rum into everyone’s lifestyle and into everyone’s mind as ‘this is a time for premium rum’?
“From a marketing point of view it’s really putting that concept into everybody’s mind – there is a moment, there is an instance where what you need is a premium rum.”
Ultimately, the goal is to encourage more consumers to sip premium rums – such as Angostura’s own 1919 and 1824 expressions – neat.
And although he described the UK market as “tough”, Georges said that Scotland represents an opportunity for rum brands, particularly with younger consumers.
“This is Scotland and the home of Scotch, and even within Scotland the perception of Scotch is different from what it is anywhere else in the world,” said Georges.
“Here the younger people think ‘Scotch is what my old man drinks’, so we’re thinking ‘good!’ and want to introduce them to something different.”
The trick, said Georges, is to win over younger customers while they are still experimenting with different categories and before they develop a loyalty to any one spirit or brand.
He said that in a drinks market as developed as the UK, where many brands have been operating for years and are “entrenched” in the marketplace, it is vital to capture interest in the rum category while younger drinkers are still making up their minds. “You really need to get to the young people before they are rushed into the mainstream,” he said.
There is also an opportunity to grow the category through food-matching, Georges said, with premium rums particularly well suited to sipping along with desserts.
“As an aperitif it [rum] is fine but that digestif that will go with your dessert is where we’re really thinking we need to get those two together. [We] almost [need] to create a new category of dessert – a dessert with a fine rum will be a signature sort of thing you will have in your bar – almost a new concept as far as dessert is concerned.”
And for rum producers such as Angostura, which can’t hope to match the larger companies in terms of marketing budgets, bar staff will be key to promoting their products.
“For us, in some cases, advertising is throwing pebbles in the ocean,” he said. “You really have to go with word of mouth.
“I’m looking for 12 disciples everywhere I go and hope that they spread the word, because at the end of the day that’s the absolute strongest recommendation you can get.”