No, this isn’t a summary of the final episode of this season’s Downton Abbey, but the presentation of the 2012 SLTN Awards in Glasgow last week. 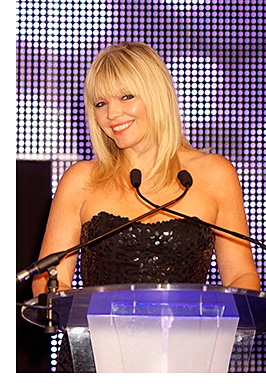 This Morning presenter Kate Thornton was the celebrity compere as the winners of 23 individual award categories were announced before 700 guests at the Hilton Hotel, with success coming from all parts of the country.
Glasgow, and in particular Stravaigin in the west end, was the biggest winner on the night.
But there was joy too for people and businesses in and around Aberdeen, Edinburgh, Fraserburgh, Fort William, Perthshire and Ayshire, as the industry’s finest operators put their business challenges momentarily to the side and reflected on a year of success.
It was an especially memorable night for everyone connected to Stravaigin, the bar and restaurant owned by Carol Wright and Colin Clydesdale, which triumphed in three categories.
Equally the best haul ever taken by an individual business at the SLTN Awards (Edinburgh venue Voodoo Rooms scored a hat-trick back in 2008), Stravaigin won the Wine, Inspiration and Restaurant of the Year (under £35 category) Awards.
But while Stravaigin equalled a record a Highland business made a brand new one. Fiddler’s in Drumnadrochit, led by malt enthusiast Jon Beach, won the Whisky Bar of the Year Award for an unprecedented fourth time.
Stravaigin’s success capped a great night for Glasgow at the Awards, with the west end venue one of seven winners from Scotland’s biggest city.
Campus, Carlo Citti’s student-led venue on Sauchiehall Street, was at the double, taking the inaugural Year of Sport Award and the Social Responsibility Award.
Two venues in the east end of the city took awards: The Kimberley Tavern in Tollcross was named Community Bar of the Year and West on Glasgow Green was named Family Outlet of the Year. And there were wins for three city centre venues: The Rooftop Terrace at 29 on Royal Exchange Square took the Award for Best Smoking Facilities; Mal Spence of five-star hotel Blythswood Square was named Mixologist of the Year; and Metropolitan on Candleriggs won the award for Late Night Venue of the Year.
But Glasgow didn’t have it all its own way. Ayrshire hotel firm SimpsInns netted two of the prestigious corkscrews – not only did Waterside in Seamill win the Refurbishment Award, the project that brought it to life also gained founder Malcolm Simpson the Entrepreneur Award.
Cheers in Fraserburgh had plenty to shout about, winning one prize (Beer Quality) and taking highly commended slots in two (Best Smoking Facilities and Social Responsibility).
The night’s other winners were: Bond No.9 in Leith (Spirits Bar of the Year); Alec Trousdale of the Queen’s Arms in Edinburgh (Barperson of the Year); Orchid in Aberdeen (Cocktail Bar of the Year); The Roost in Bridge of Earn (Restaurant of the Year £35 and over); the Oak Tree in Balmaha (Independent Pub or Bar of the Year); Dale Monk of the Crofter bar in Fort William (Licensee of the Year); Martin Young of the Mains of Scotstown Inn in Bridge of Don (Award for Community Giant); and PB Devco in Aberdeen (Independent Multiple Operator the Year).
The ceremony concluded with the Award for Industry Achievement, which this year went to Harry Hood, the founder of Lanarkshire’s Lisini Pub Co

Restaurant of the Year, £35 and over category, sponsored by Bunnahabhain
Winner: The Roost Restaurant, Bridge of Earn
Highly commended: Brian Maule at Le Chardon d’Or, Glasgow

Restaurant of the Year, £35 and under category, sponsored by Bunnahabhain
Winner: Stravaigin, Glasgow
Highly commended: Wedgwood the Restaurant, Edinburgh