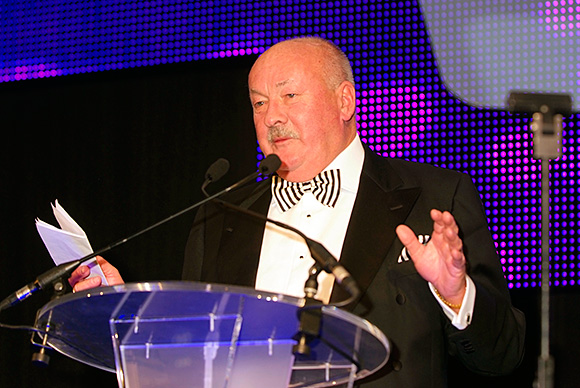 TV star Kate Thornton was in Glasgow last night to hand out the gongs at the 17th SLTN Awards, the recognition scheme hosted and organised by Scottish Licensed Trade News (SLTN).

The celebrity presented awards to 23 of Scotland’s best pubs, clubs, restaurants, staff and operators before an audience of 700 at the five-star Hilton hotel.

And Glasgow’s Stravaigin, the bar and restaurant on Gibson Street, was the star of the show, lifting no fewer than three of the prestigious prizes.

Stravaigin, owned by Carol Wright and Colin Clydesdale, was one of seven winners from Glasgow as ten SLTN Awards went to venues in Scotland’s biggest city.

Campus, the student venue on Sauchiehall Street, took two, and there was success for The Kimberley
Tavern, West, 29, Metropolitan and cocktail expert Mal Spence of Blythswood Square.

But it wasn’t all about Glasgow: Fiddler’s in Drumnadrochit, Loch Ness, was named Whisky Bar of the Year for a record fourth time, and awards also went to people and businesses in and around Edin- burgh, Aberdeen, Fraserburgh, Fort William, Perthshire and Ayrshire.

The ceremony concluded with the presentation of the 2012 Award for Industry Achievement, which went to Lisini Pubco founder – and former Celtic star – Harry Hood (pictured).

Now in their 17th year, the SLTN Awards are created and hosted by Scottish Licensed Trade News, since 1964 the leading news publication for the Scottish trade. The Awards aim to recognise excel- lence across all aspects of Scotland’s licensed trade, from community locals to cocktail bars.

SLTN editor Scott Wright said: “It’s been another tough year for Scotland’s licensed trade, with con- sumers still concerned about jobs and the economy and businesses under pressure from a lack of bank support and a punitive tax regime.

“Last night’s winners deserve enormous credit for rising to the challenge and displaying the high standards, innovation and value our industry is famous for.”