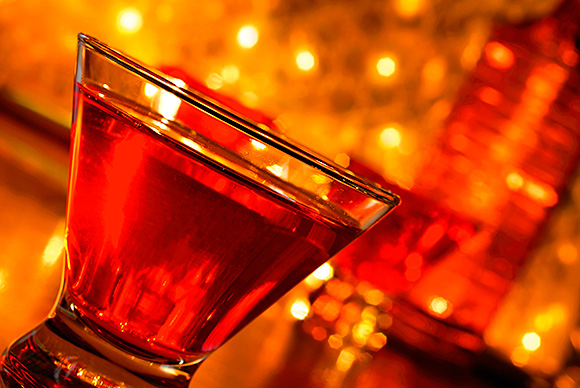 THERE’S nothing new in the assertion that consumers have become more willing to ‘trade up’ on drinks as the economy has remained stuck in the doldrums.

According to a trend dubbed the ‘weekend millionaire’, people are generally visiting pubs and bars less during the recession but spending a little bit more when they do, benefiting premium products in particular.
As Christmas approaches, one major spirits firm insisted the pattern is likely to become even more pronounced over the festive period, given that drinkers spend more per occasion in December than at any other time of the year.
It’s for this reason the firm, whose brands include Absolut, Havana Club and Beefeater, is advising operators to ensure they have an ‘up-sell’ option when it comes to spirits this Christmas.
Premium spirits are said to be performing better than standard brands (up 3.5% in volume terms in the UK on-trade in the year to May compared to a 2.7% decline) and, according to Pernod Ricard, account for more than £1 in every £3 spent on spirits
And the opportunity to ‘up-sell’ on spirits isn’t limited to high-end cocktail bars, with the drinks firm claiming half of last year’s growth was driven by ‘circuit’ city centre bars and wet-led pubs.
Ian Peart, on-trade channel director for spirits at PRUK, told SLTN premium spirits “continue to do well in spite of the economy”.
“On-trade retailers have a lot to be optimistic about this Christmas,” he said.
“People spend more per occasion in the on-trade in December compared to what they typically spend on occasions that take place in the rest of the year.
“Premium spirits see an uplift of 34% over Christmas and in December we expect to see an estimated 400,000 incremental spirit consumers, driven by a combination of an increase in high-tempo occasions and pre and post-meal spirit consumption.”
Stocking a range of premium spirits looks set to be key to maximising sales next month.
There are also certain drinks categories expected to perform particularly well over the festive season.
Vodka traditionally enjoys a sales spike while whisky is said to account for 31% of after-dinner spirit serves in December (up from 19% in an average month). And according to PRUK the volume of liqueurs and speciality spirits sold increases by 36%, with Malibu tipped to go up 44%.
“Based on people’s willingness to spend more on quality spirits at this time of year and the fact that certain spirits categories tend to over-perform, on-trade retailers should ensure they offer an up-sell alternative in these key categories,” added Peart.
Stocking premium spirits is, however, only the first step, the firm said.
Operators need to shout about their drinks offer if they want to make the most of the festive trading period.
Highlighting spirits and seasonal serves on drinks menus is key to boosting Christmas sales, according to Pernod Ricard, which is offering free customised Christmas menus to help operators promote their premium drink options to consumers.
Licensees should also ensure they have a strong back-bar display and promote their spirits offer on food menus by flagging up pre-dinner and shared pitcher serves; suggested after-dinner drinks, including a dessert cocktail, such as an Espresso Martini, or a Jameson Irish coffee; and recommending simple pub food and spirit pairings, such as a gin and tonic with fish and chips or a Bloody Mary with a Sunday roast.
Bar staff recommendations are also said to be highly influential at Christmas, with 50% of consumers who accepted an up-sell claiming they did so because staff appeared knowledgeable about that spirit, according to Pernod Ricard UK.
But the drinks firm said its own research has highlighted missed opportunities, with only 8% of vodka being up-sold by staff, despite 56% of vodka drinkers saying they are willing to pay more for a ‘quality vodka’; it also claims 62% of consumers view more expensive spirits as almost always being better quality and are willing to pay more for them.
Finally, operators must ensure they offer consistently good quality drinks.
Christmas traditionally sees a whole host of people who wouldn’t usually visit bars and restaurants out in the trade, giving bar and restaurant owners the chance to impress customers enough that they will want to return to the outlet in the new year.
PRUK has devised a range of festive serves, from simple build drinks to more sophisticated cocktails, to help outlets capitalise on the extra festive footfall.
“To fully realise the benefits from premium spirits at Christmas, we recommend retailers keep their  offering fresh and appealing,” added Peart.
“This means stocking quality spirits, presenting and highlighting them in a compelling way, making great-tasting drinks and offering something new or different.”

Christmas sees a whole host of people who wouldn’t usually visit bars and restaurants out in the trade, giving operators the chance to impress customers enough that they will want to return to the outlet in the new year.