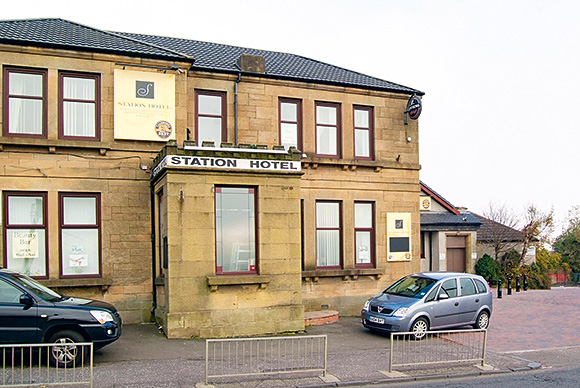 A FAMILY business in Lanarkshire is looking to expand into events following an extensive refurbishment.

The Station Hotel in Shotts has been owned by the Murphy family for over a decade, but has spent much of that time under lease to other operators.
However, the family recently regained control of the property and found themselves faced with a decision.
“There were two ways we could go: we could have stuck with it and tried to ride out the storm, but we decided to totally renovate it and try and create a function suite, which we’ve done and hopefully done quite well,” Paul Murphy said.
The renovation, which was started in the summer and completed late last month, involved the construction of a new events space and kitchen, public bar and restaurant, new toilets and the refurbishment of two letting bedrooms.
Paul described the project as a “total strip out, right down to the roof, brick and floors”.
And he said the job represented a “significant” investment for the family, which runs five other properties in the central belt.
The aim of the work, which was carried out by Tennyson Interiors, was to blend the traditional feel of the hotel with a more modern style of décor.
Part of the hotel’s traditional horseshoe bar was retained, in order to create what Paul described as a “traditional bar with a modern feel to it”.
“It’s trying to create a bit of everything,” he explained.
“Having the old bar there was a real plus for us. Reclaiming that allowed us to keep a bit of the identity of the place.
“The Station Hotel was always the main focal point in Shotts.”
Bobby Tennyson, director of Tennyson Interiors, said it was crucial that some of the original look and feel of the property was retained throughout the refurbishment process.
“The Station Hotel is very rooted in the Shotts community, so it was felt that, although we were doing this major transformation, we didn’t want to lose any of that feel,” he said.
“We still wanted it recognisable as the Station Hotel, although we’ve moved into the 21st century.”
Longevity was also a key priority for the project, with Tennyson explaining that it was important for the new interior to not date “too quickly”.
“We’ve kept the traditional feel, but using contemporary colours and designs so that the place doesn’t feel old fashioned,” he said.
“We’ve given it a modern lift.”
Meanwhile, the newly-constructed 150-cover function suite will allow the hotel to move into the events market and expand outside of its local customer base.
Traditionally, the property has attracted customers from Shotts, as well as surrounding towns such as Fauldhouse, Harthill and Allanton, but Paul said the refurb should help to attract customers from further afield.
In addition to weddings, the Station Hotel will also target a range of different events markets, including corporate functions.

There’s a lot of competition, but we’re trying to be a little better than everybody else.

Paul reckons the hotel’s location also makes it ideal for corporate customers in both Glasgow and Edinburgh.
“Shotts is on the mainline between Glasgow and Edinburgh, so we’re hoping to target some conference business,” he said.
“From Shotts you can be in Glasgow or Edinburgh in under 30 minutes, so we’re hoping to capitalise on that market, as well as funerals, anniversaries and birthday parties.”
The project has also seen the renovation of two of the property’s bedrooms, as well as new ladies, gents and disabled toilets.
Currently, the Station Hotel has ten letting bedrooms, four of which are en suite.
However, plans are already in place to remove one of these rooms and upgrade the rest to include bathrooms.
Work will begin on upgrading the hotel’s remaining rooms next year.
Paul singled out the family’s key contacts at Tennent’s, RBS, Shaughnessy’s solicitors and Tennyson for their contributions to the project.
“Like everywhere, there’s a lot of competition, but we’re trying to be a little better than everybody else, and hopeful that will lead us to being successful at it,” he said.
As well as the Station Hotel, the Murphys’ other properties include the Commercial Inn in Fauldhouse, Cross Keys in Wishaw and the Courtyard Bar in Hamilton.

The Station Hotel is rooted in the Shotts community – we didn’t want to lose that.

Paul runs the company with his father, Tommy, brother (also Tommy) and sister Sharon, with the family members splitting their time between the six different properties.
Paul said the family would “all be hands-on in here [the Station Hotel] for the foreseeable future.”

Image – The Station Hotel’s traditional feel was updated with contemporary colours throughout the bar and function suite, above.