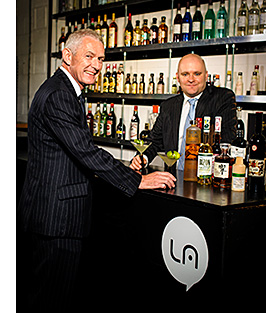 INVERARITY Morton is poised to dramatically broaden the choice of spirits it offers outlets around Scotland after swooping to acquire LA Wholesale.

IM confirmed the deal to buy the specialist spirits wholesaler, a division of Scott Gemmell’s LA Group, for an undisclosed sum yesterday (October 31).
With its strength traditionally lying in wine and mainstream beers and spirits, the move significantly boosts IM’s presence in the fast-growing premium end of the spirits market.
Gemmell established LA Wholesale in 2009 and has since introduced a range of specialist spirits and bitters to top end bars in Scotland. Its portfolio of more than 400 brands includes Tapatio Tequila, Sipsmiths London Dry Gin and Santa Teresa rum.
The deal, however, does not extend to the LA Group’s other divisions, which span training, bar consultancy, events and multi-media services.
IM managing director Stephen Russell said the acquisition allows the firm to tap into Scotland’s burgeoning cocktail and quality drinks culture.
Only 70 of the 400-plus brands LA wholesales are currently carried by IM, meaning its customers can choose from more than 300 further brands.
“We do share some of the customers, but there are opportunities for us with the customers we don’t currently trade with,” he told SLTN. “And there are obviously huge opportunities to develop the portfolio into our more extensive customer base.”
Russell, who confirmed LA’s Angus Russell had joined the IM sales team, said the deal also brought training opportunities for its customers. The firm has a well-established wine training school and will now offer its customers courses that take place at LA’s training academy in Glasgow.
Gemmell said the acquisition vindicates LA’s diversification into drinks wholesaling three years ago – a move he insists has raised the standard of product served in Scotland’s bars.
“With the marketplace now maturing and our wholesale operation being pulled in every corner, we see great sense in working hand in hand with IM,” he said. “Scotland now officially has a wholesaler that can meet the needs of any drinks operation – from community bar to five-star hotel.”
The LA deal comes after IM was created following William Morton’s acquisition of Inverarity Vaults last summer.