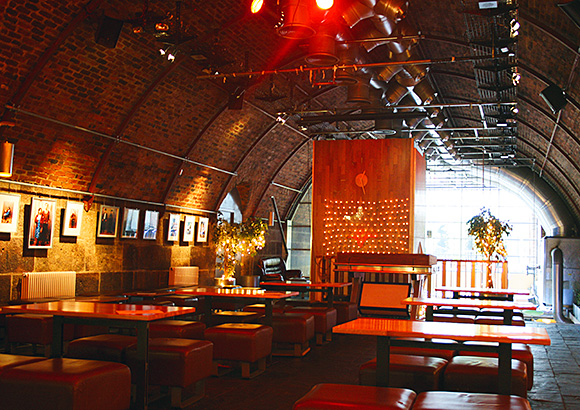 2012 has been a landmark year for The Arches, the combined arts, events, club and live music space in Glasgow city centre.

It marks the 21st birthday of the sprawling venue, which occupies the vaulted areas beneath the railway line leading to Central Station.
Co-funded by arts body Creative Scotland, and run on a not-for-profit basis, The Arches originally opened as a theatre venue in 1991.
At that time it had most recently been used to house an exhibition as part of Glasgow’s year as European City of Culture, but former Arches artistic director Andy Arnold saw its potential and took on the lease the following year.
Within a year of opening The Arches had expanded into hosting club nights, and in the following years would add live music, corporate events and even weddings to its widening programme.
Then The Arches added yet another string to its bow with the opening of its own dedicated cafe bar and restaurant, following a major refurbishment in 2001. 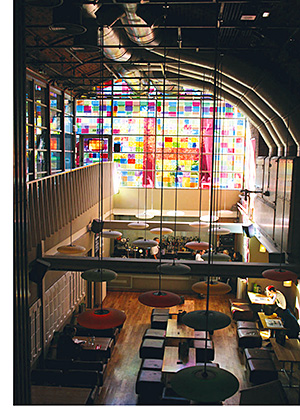 The versatility of the venue has been at the heart of its success, as director of operations Blair Sutherland told SLTN last week.
“Every time you come into The Arches it will look a little bit different, because a lot of the fixtures and fittings aren’t fixed, with the exception of the café bar and the two main bars,” said Sutherland, who joined the venue a year after its launch.
“None of the DJ stages are fixed to the walls – it’s a listed building and we’re not allowed to drill into it.
“So upstairs can be a DJ room or a live music area, it can be used for book launches or part of a corporate show.
“A live club event won’t look the same as a corporate event.”
Full-time technical and maintenance teams are employed to transform the venue into its various guises, and with several events a week during the winter months, they are certainly kept busy.
In November alone The Arches will host a number of club nights, gigs, Glasgow’s Whisky Festival and several theatre productions while the building’s basement hosts the return of popular ‘scare attraction’ Alien War.
Based on the blockbuster Alien films, Alien War is essentially a modern take on a haunted house attraction, where audience members are ushered through a purpose-built set and terrorised by aliens.
It first arrived at The Arches in 1992 and is enjoying a 20th anniversary revival at the venue until April.
Sutherland said that balancing events such as Alien War with dance rehearsals, live gigs and theatre productions – and ensuring they don’t intrude into one another – is one of the key challenges of co-ordinating the venue.
When you consider the building has a capacity of 2700, that’s no mean feat.
Overseeing the cavernous space is a team that can number up to 100 staff, depending on the night, and includes bar and floor employees as well as door stewards and technicians.
Also under pressure are the venue’s drinks suppliers, including Tennent Caledonian Breweries, Inverarity Morton and Wallaces Express, as drinks orders will vary depending on the events taking place each month.
“The good thing is that we’ve been working with them for years and they know when our busy times are, they know that we’ll always give as much notice as possible,” said Sutherland.
“We’re coming into our busy period and they know our orders will increase dramatically.”
The majority of the venue’s funding is self-generated, with the lion’s share of that money coming from club nights, and Sutherland said the city’s club scene has changed considerably in the 21 years since The Arches first opened its doors.
He also feels the bar trade has been transformed during that time.
“A lot of competition [emerged] about a decade ago, when a lot of good style bars and great operators came to the fore,” said Sutherland.
“There’s a lot more focus on product now than there was back then, certainly in the bar scene.
“There’s a much bigger expectation of customer service.
“We expect every member of staff to know how to match food and drink, to know how a cocktail is made and why it’s made like that.”
And this improvement has been reflected in the attitudes and expectations of consumers, according to Sutherland.
“Over the past five or six years customers have become a lot more aware of different types of brands,” he said.
“They’re asking for a certain type of rum or a certain type of gin, which we didn’t have as much of ten years ago. I think people are aware, and we have seen how rums and Cognacs have grown in the market.
“Customers are a lot more educated and knowledgeable about what they require.”
Building the food side of the business has been a major focus for The Arches in recent years, and the venue regularly promotes its cafe bar through offers on deals website 5pm.co.uk as well as through its own site and social media.
Despite consumers’ worries over cash, food sales at the venue are said to have risen over the last year.
“That’s not to say that the wet side has gone down, it’s just that people are maybe going out once a week, but they’re going for a meal as well as a drink,” Sutherland said.
As to the future, the venue has recently secured a grant from Creative Scotland that will be used to renovate parts of the building.
But Sutherland said the main focus for the future will be “trying to get better at what we’re doing for the next twenty-odd years.”
And that surely can only spell good news for the trade – and the city’s music and arts loving public. 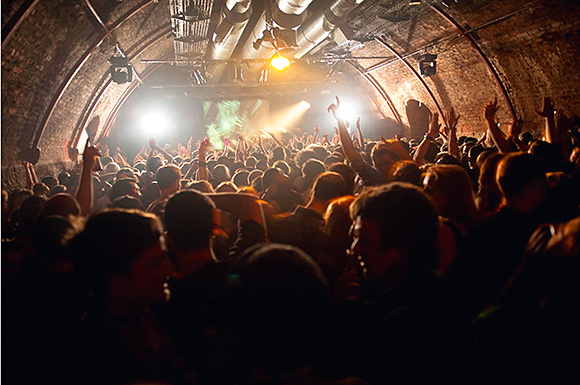 Images – Raising the bar: The Arches opened its cafe bar in 2001, following an extensive refurbishment. Many faces: The Arches caters to a range of different events, including club nights, corporate functions and weddings. The venue is part funded by arts body Creative Scotland and run on a not-for-profit basis.