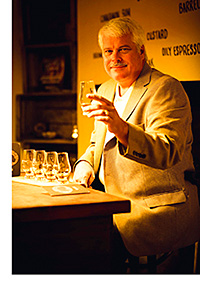 EDINBURGH bartenders and consumers got the chance to expand their knowledge on bourbon at a masterclass hosted by Buffalo Trace’s master blender.

Drew Mayville was in the capital last month for the event at Centotre restaurant on George Street.
The master blender covered the history, production and range of products made at the Kentucky distillery, as well as leading the group through a tasting of 11 different bourbons from Buffalo Trace. The range includes Buffalo Trace White Dog (an unaged, clear whiskey bottled before barrelling); Benchmark (an aged bourbon at entry level price); Sazerac Rye (a spicy rye recipe whiskey); Eagle Rare Single Barrel (a ten year old bourbon); and the five-strong Antique Collection, which includes Eagle Rare 17 year old, George T Stagg, Sazerac Rye 18 year old, Thomas H Handy Sazerac Rye and William Larue Weller.
Drew said the event proved whisky enthusiasts are more than happy to broaden their horizons.
“It was a little daunting to be talking about bourbon in the home of Scotch whisky,” he said, “but we have a great deal in common.
“I’ve always found that there’s a great deal of interest in the way Scottish pioneers took their whisky-making skills west and created the bourbon industry.
“Working with four basic mash recipes, we are able to produce so many acclaimed whiskies with different taste profiles thanks to the micro-climates in our various warehouses.
“We also have the advantage that ageing bourbon in Kentucky for eight years is virtually like ageing a Scotch for more than 20 years due to the temperature fluctuation.”