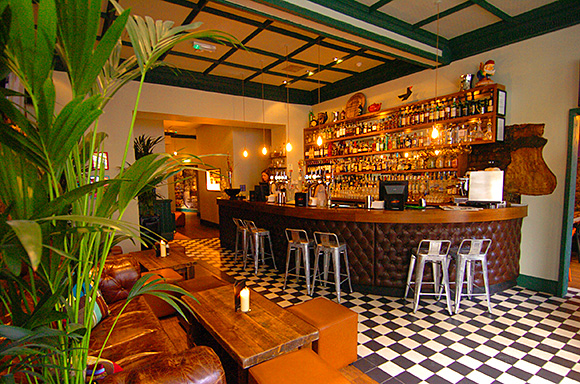 From the original frieze, exposed stone walls and black and white ‘chessboard’ floor tiles to the contemporary geometric blackbird design on the wallpaper, bold orange Billiani ‘Doll’ chairs and edgy street art adorning the mural and menus, the two styles blend seamlessly in the Leven Street outlet.
It’s a look operators Colin Church and Martin Luney are clearly delighted with.
But as they told SLTN ahead of the launch of The Blackbird in late September, their initial plans for the outlet were very different.
The pair, whose Big Red Teapot group was set up four and a half years ago and also owns Treacle and Hamilton’s in Edinburgh, had first looked at the former Auld Toll Bar a year ago. But plans for a major revamp, which incorporated a glass roof, hit the buffers.
A new search for an old building with outside space proved fruitless so, a year on, they returned to the Leven Street premises and, with their new plans rubber-stamped, took on the lease from Iona Pub Partnership, which is the landlord of their two other bars.
Armed with inspiration from the east London districts of Hoxton and Shoreditch, Colin and Martin came up with a “very British” design for the venue and, at the end of July, work got underway on the seven-week revamp.
Working with Iona’s build team, the first four weeks of the project saw the walls stripped back to the original stonework, an internal wall constructed to create a separate dining area and a new kitchen installed. A curved bar, with Chesterfield-style leather frontage, and four -tier gantry were also built, and the toilets were revamped with British racing green tiles.
With the internal shell complete, Colin and Martin focused on bringing their “fun and laid-back” design to life.
Having decided on the bar’s name early on (the operators said they wanted a quirky take on traditional British pubs named after animals, birds or trees and “The Blackbird just stuck”), wallpaper with a geometric blackbird design was created and used on the ceiling in the dining area.
Bespoke tables made from reclaimed railway sleepers were created by Edinburgh-based Vintage & Reclaimed and paired with contemporary ‘Doll’ chairs in the dining area.
In the bar area, the tables have been teamed with leather cube seats, Chesterfield sofas and a bespoke sofa upholstered in a patchwork of different fabrics and tweeds chosen by Colin and Martin.
At the rear of the venue there’s a large wall mural – a hallmark of the other bars in the Big Red Teapot portfolio – based on the Mad Hatter’s Tea Party from Alice in Wonderland (a theme which extends to the cocktail menu – see story right).
Outside, the garden was cleared and fitted out with new decking and wooden tables and chairs by Scaffa, which manufactures furniture from reclaimed scaffolding boards. The Blackbird name, featuring a geometric blackbird logo for the letter ‘k’, has been painted on one of the external walls.
The ‘old meets new’ strategy was also applied when it came to sourcing the bar’s glassware, most of which was bought in vintage stores and online, and mirrors, which hang alongside work by Edinburgh College of Art graduate Katy Anderson.
Martin admits the end result at The Blackbird is quite different from their initial plans for the venue.
But he said it’s been well-received by customers.
“We were influenced by London, specifically east London, and people are getting the reference,” he told SLTN.
“We wanted to bring east London as it is today to Edinburgh; it’s designed to be fun and laid back.
“The plans we had a year ago were much bigger but we went back to the drawing board and it’s the same location but a very different bar.
“We’ve given it an identity for today but kept the original features.
“It’s going really well; we’ve been very busy since we opened.”
With The Blackbird up and running, Colin and Martin’s next focus is to add a bar consultancy division to Big Red Teapot, which already has an events arm, in the new year.
They reckon their individual skills – Martin trained as a chef and has a background in restaurants while Colin’s expertise lies more in the bar and drinks side of things – are complementary.
And the pair said they haven’t ruled out opening further bars in future.
“It [launching bars] has got easier in some ways because we know how each other works,” added Colin.
“We said we would do three in five years and we have so it’s time to do a new five-year plan.” 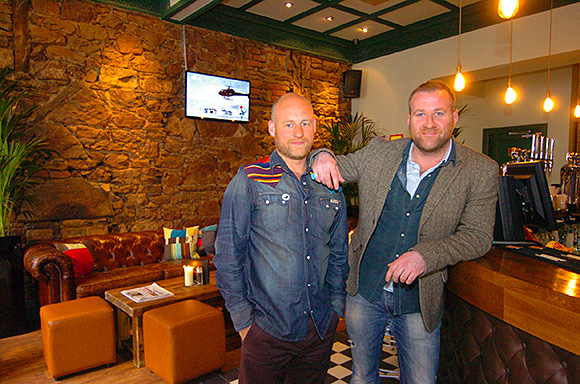