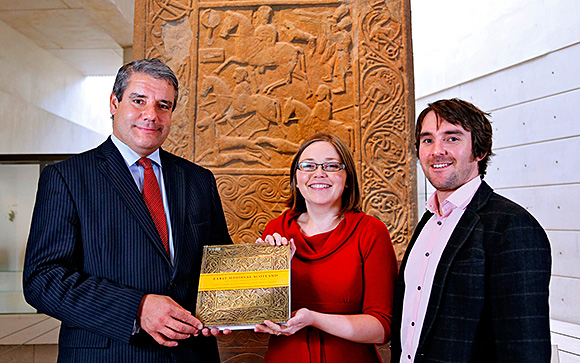 A NEW book backed by The Glenmorangie Company aims to shed light on the Dark Ages.

Published by National Museums Scotland, ‘Early Medieval Scotland: Individuals, Communities and Ideas’ reveals that early medieval Scotland was more sophisticated than many people think, with craftsmen using complex technologies to create works of art.
The book also reveals that the identity of the mysterious figure on Pictish stone carving, the Hilton of Cadboll cross-slab, long thought to be a Pictish princess, could be one of Scotland’s earliest surviving depictions of Jesus.
Paul Skipworth, president and managing director of The Glenmorangie Company, said the publication of the book represents a “significant milestone” in the firm’s six-year partnership with National Museums Scotland.
“It is the result of two Scottish iconic institutions pooling their expertise to further our understanding of Scotland’s past and enrich its culture,” he said.
“The Hilton of Cadboll Stone, originally found near Glenmorangie’s distillery, is a national treasure from this period and the inspiration for our company logo, which proudly adorns our whisky bottles around the world.”
Alice Blackwell, co-author and Glenmorangie research officer at National Museums Scotland, said: “There is a great appetite worldwide to learn more about this fascinating period in history and with Glenmorangie’s support we can now provide unique insights into a complex and sophisticated society.”