Glasgow venue looking forward to next decade after celebrating first in style. 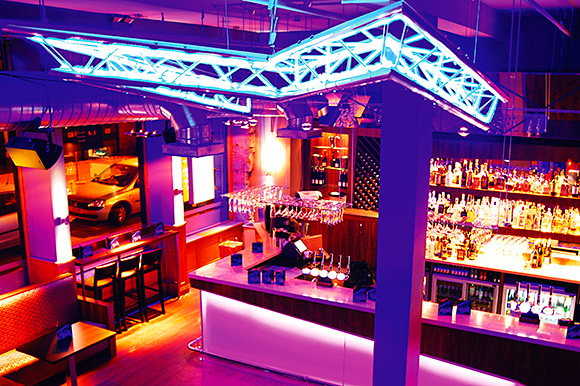 THE Queen celebrated her Golden Jubilee, Girls Aloud’s debut single Sound of the Underground was Christmas number one and the Falkirk Wheel opened in 2002. It was also the year Metropolitan launched in Glasgow.

Ten years on and the Merchant City outlet marked the milestone birthday with a party featuring everything from trapeze artists and dancers to bongo players and DJs flown in from Ibiza.
Having taken two months to plan, and at a cost of around £14,000, which included a major marketing campaign on Glasgow’s underground, it’s fair to say the team at Metropolitan pulled out all the stops for the birthday bash.
But as general manager Darren Scott told SLTN last week, the party was as much about celebrating the past decade as looking ahead to the next.
“Ten years was a marker for us and we wanted to have certain things done by then and to use it as a benchmark to go forward,” said Darren, who has been at the helm of Metropolitan, which is owned by Kevin Maguire, for the past five years.
“There was a lot of training which was geared towards the party but the message to staff was that the party was not the end but the beginning.
“My honest evaluation of Metropolitan is that we’re very good but we need to be even better; we need to be the best.
“Yes times are hard and there are bars and restaurants going under but there are also plenty of new places opening up so we need to make sure we’re the best.”
That the venue has managed to evolve over the decade is considered key to its longevity. A revamp two years ago saw the original circular bar replaced with a straight design, while upstairs the piano lounge has gone from being part of the restaurant to a bar area in its own right.
More recently, a £75,000 ‘mini’ refurbishment was carried out for the 600-capacity venue’s tenth birthday.
The toilets in the basement have been overhauled and the spiral staircase connecting the basement, ground and first floors has been freshened up. Upstairs, the layout of the 170-cover balcony restaurant has been simplified and brightened up with new glass panels overlooking Merchant Square.
Beyond the cosmetic changes, the restaurant has been given its own identity with a distinct new logo and signage, as well as a new menu majoring in Scottish produce. The wine list, supplied by Alexander Wines, was revamped ahead of the new menu launch and the draught beer and cider range was refreshed, with St Mungo, Tiger, Caledonia Best, Estrella Damm and Rekorderlig Strawberry & Lime joining Tennent’s, Heineken and Guinness on tap. Metropolitan’s vast range of premium spirits, sourced from Inverarity Morton, will also feature in the new cocktail list, which is due to be launched in the next few weeks.
Darren reckons the combination of continually refreshing the offer and interior with consistent quality and customer service has been key to Metropolitan’s success over the past decade.
“Ten years is a huge accomplishment, especially given the [economic climate in the] last two or three years,” he said.
“But I think Metropolitan is successful because it’s not really varied from what it was when it opened. Yes there have been subtle changes along the way but the ethos of constantly striving to be the best is key to its staying power.
“We’re the size and turnover of a high street bar with the customer service and standards of a boutique cocktail bar and I think there are very few places that have that.”