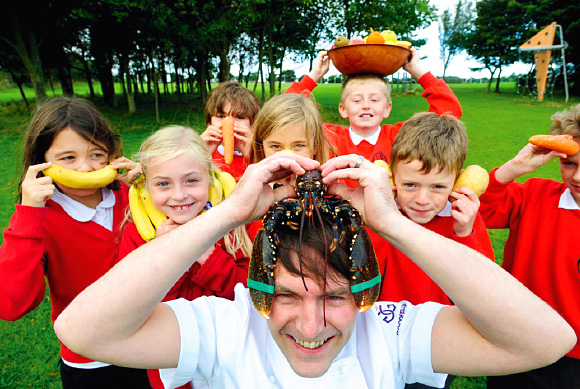 CHILDREN at an East Lothian primary school were given a crash course in local produce last month when they were visited by a top chef.

John Paul, executive of the Macdonald Marine Hotel and Spa in North Berwick, made the trip to Law Primary School as part of Scottish Food & Drink Fortnight.
During the visit he spoke to pupils about locally-sourced vegetables as well as seafood such as lobster.
Scottish Food & Drink Fortnight, held in the first two weeks of September, celebrates the best of Scottish produce.
Chef Paul, who has worked under Raymond Blanc and Gordon Ramsay, launched his eponymous restaurant, John Paul at the Macdonald Marine Hotel, last summer.
The restaurant combines traditional and contemporary Scottish cuisine, with top billing given to fresh, locally-sourced Scottish ingredients.

Image: John Paul has some food fun with the kids of Law Primary School last month.