Is the drinks industry doing enough to cater for female drinkers? A selection of suppliers share their thoughts on attracting the ladies

FEMALES account for a huge slice of on-trade revenues, but how proactively are brand owners targeting the fairer sex with their products?

And which brands should operators stock to appeal to their female customers?
Pitching products solely at women can be tricky, as evidenced by the recent decision by Molson Coors to discontinue its ‘female-friendly’ beer, Animee.
Yet there’s no question that women are continuing to spend money in the on-trade.
Andrew King, CEO of puree, syrup and cocktail mixer brand Funkin, said products such as low-calorie or ‘skinny’ cocktails have become particularly popular in outlets looking to attract female customers.
“From Funkin’s perspective, a drink must deliver a balance of flavours, and colour is often important,” he said.
“One aspect that is increasingly important is the shared vessel, and on the ‘girls night out’ there is an increasing trend to share pitchers of cocktails and this is resonating with consumers and providing a great simple solution for bar owners.”
Cider is also said to be proving popular amongst women.
Darryl Hinksman, head of UK on-trade customer marketing at Heineken, whose cider brands include Bulmers and Jacques, said the fruit flavoured ciders in the Bulmers range are designed to appeal to both men and women.
The introduction of the two-thirds of a pint ‘schooner’ glasses for its Heineken, Amstel and Tiger brands is another way the brewer aims to make its beers more appealing to females.
Hinksman said the branded glasses allow licensees to “cater for drinkers who want to enjoy a premium world beer on draught in a measure that offers the perfect ‘halfway house’ between traditional pint and half pint serves”.
“Female-centric products run the risk of being seen as patronising to women but licensees should not underestimate the benefit of stocking brands that are overtly popular among female consumers – or the significant influence they wield on the choice of drinks their male companions enjoy on mixed-sex drinking occasions,” he said.
On the soft drinks side, Appletiser has also been focusing its attention on the female market this year.
The recent ‘sparkle on’ marketing campaign for the brand was aimed directly at women, with parent company Coca-Cola Enterprises (CCE) describing the soft drink’s target market as 30-40 year-old ‘successful’ and 25-50 year-old ‘aspirational’ females.
The £3 million campaign, which included national sampling and digital marketing activity, was devised after consumer research was commissioned to identify things that make women feel more confident about themselves.
“Our ‘sparkle on’ campaign aims to help women realise their inner sparkle, by providing a product and digital content that is relevant as well as generating interest and excitement,” said CCE’s Bruce Scott. 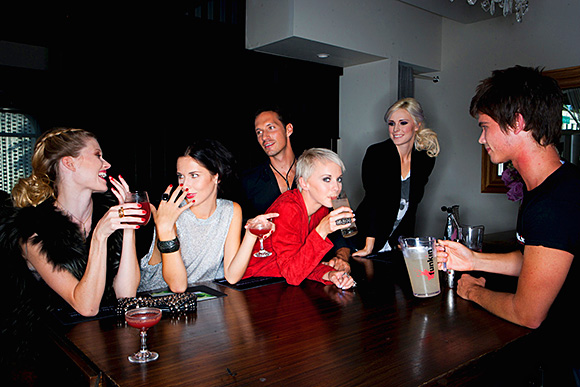 Images: Above, Bars looking to attract female consumers should consider low-calorie cocktails, according to Funkin. Top, Fruit ciders are proving particularly popular with women, according to Bulmers and Jacques owner Heineken UK. The brewer said licensees should not underestimate the importance of stocking female-friendly brands.