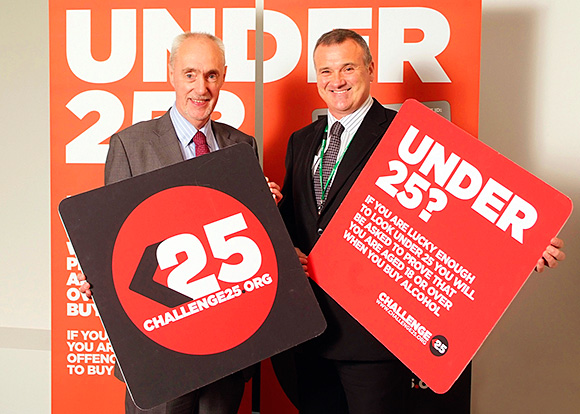 IF some of the many changes made to licensing law over the past year have failed to register with every member of the trade, it’s certain that challenge 25 has passed no one by.

Having an age verification policy in place – which outlines the steps that should be taken to establish the age of a person trying to buy alcohol if they look under 25 – became a mandatory condition of premises licences from October 1, 2011.
On paper, that seems straightforward enough.
In practice, there’s been a fair amount of confusion.
Does the policy have to be reduced to writing?
Technically, the answer is no, but it would be foolish in the extreme not to incorporate the age challenge requirement in training materials.
Are there rules about signage? Again, that’s not obligatory, but I thoroughly recommend the display of the Drinkaware posters, which can be downloaded at http://bit.ly/pCQ1UA.
Then, adding to the confusion, there’s the conflict between the policy and the so-called section 110 notice that must be displayed at every place where alcohol sales are made.
This is the familiar notice which sends a ‘challenge 18’ signal to customers, telling them that it’s an offence for a person under the age of 18 to buy or attempt to buy alcohol, as well as an offence for any other person to make or attempt to make an ‘agency purchase’ for a person under 18.
Not only does that notice muddy the waters, it’s also wrong: the licensing Act allows a person aged 18 or over to purchase beer, wine, cider or perry for consumption by a person aged 16 or 17 along with a meal.
Now there’s a further twist.

While the court will see the purchaser, boards are never able to form their own age assessment.

Police in part of Ayrshire have, according to a local newspaper, launched a challenge 25 enforcement campaign.
It will be interesting to see the shape this takes.
Perhaps it will involve so-called integrity testing, which is already operated in one council area.
This is the practice of sending a volunteer aged 18 into licensed premises in an attempt to buy alcohol. Unlike test purchasing, it has no legal basis.
Now, assuming that the volunteer will look less than 25 and he or she manages to make an alcohol purchase without being asked for ID, has an offence been committed?
Absolutely not.
In such a case the policy will not have been implemented by the member of staff selling the alcohol. But provided there is a policy and its existence can be demonstrated no prosecution can follow. It’s also difficult to see any basis for a premises licence review.
To complicate matters further still, suppose alcohol is sold to a 16 year old during an official test purchase operation and let’s say the person selling the alcohol assessed the purchaser’s age at around 19. That would obviously amount to a disregard of a challenge 25 policy, but there could nevertheless be an acquittal in the event of a prosecution.
A person charged with the sale of alcohol to a person aged under 18 has two potential defences.
Firstly, he or she can show that reasonable steps had been taken to verify the purchaser’s age through the production of an approved document (currently a passport, EU photocard driving licence or a hologram-bearing PASS card).
Alternatively, the accused can show that “no reasonable person” could have suspected from the purchaser’s appearance that the purchaser was aged under 18.
There’s the rub. While a court will see the purchaser, licensing boards are never able to form their own age assessment.
This, in my view, is a very unsatisfactory state of affairs.
By all means, let’s clamp down on those who willfully or recklessly sell alcohol to under age persons.
But, at the risk of repeating what I’ve said before in this column, let’s also give the licensed trade the same rights under the law as everyone else and have accusations of criminal behaviour properly tried in the court.